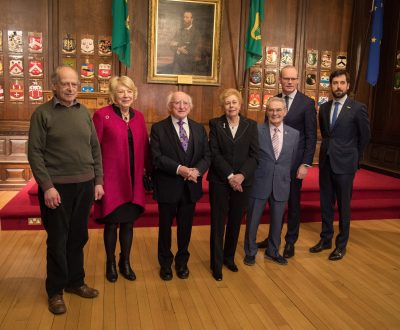 President Michael D. Higgins has warned that “an ugly anti-migrant sentiment is attempting to rear its head in Ireland” as he appealed to people not to become passive observers of prejudice or inequality.

In his speech for the National Holocaust Memorial Day at Dublin’s Mansion House on Sunday, the President lamented how virtually every continent is “witnessing the growing rise of various forms of a corrupted, distorted version of an exclusionary … type of nationalism”.

Condemning the “toxicity of anti-Semitism”, he said it should be identified and called out for what it is – “an invitation to hatred and hate speech.”

President Higgins urged people to be alert to the rise of racism and hate speech, and to continue to share a common obligation to value and uphold democracy, human dignity, liberty, equality, and the irreducible, indivisible rights and dignity of a shared humanity.

He said it was “deeply worrying” to observe an emerging trend of extremist language and politics across the streets of Europe, “one that seeks to exploit what is often a loss of trust, but much more frequently informs a populism that invokes fear, exclusion and rejection of the ‘Other’”.

In his address to mark National Holocaust Memorial Day, which falls today Monday 27th January, and also to mark the 75th anniversary of the liberation of Auschwitz, President Higgins highlighted that the vast majority of those murdered in Auschwitz were Jewish women, men and children.

Two Holocaust survivors, Tomi Reichenthal and Suzi Diamond, attended the commemoration of the liberation of Auschwitz in Dublin. President Higgins paid tribute to them and also to Kinga Paszko, whose family received the honour of Righteous Among the Nations for saving the lives of a Jewish family during the Holocaust.

Three-quarters of a century ago, the 60th Army of the First Ukrainian Front arrived at Auschwitz.

The head of state said it remains hard to imagine fully the horrors they uncovered – the mass graves and the remains of the 1.1 million people “systematically murdered, their possessions and personal belongings that spoke so poignantly and more powerfully than any words could possibly do, of the simplest and most basic intimacies of humanity of those who were herded into the concentration camps and gas chambers, the site of such appalling crimes”.

Those who liberated the camps discovered approximately 7,000 surviving prisoners, of whom 180 were children, left behind in Auschwitz by the fleeing Nazis.

Others put to death in Auschwitz included non-Jewish Poles, members of the Roma community, Soviet prisoners of war, homosexuals, the disabled, and political and religious opponents.

“The sense of horror and revulsion felt by those who liberated Auschwitz has reverberated through the decades so hauntingly. Let us not forget that so little time separates us from the evil that was the Holocaust. This is not an event from the distant past.”

Dr Higgins also underlined that the atrocities of the Holocaust were preceded by the hate of anti-Semitism, and the exclusion of minorities. He said people must be vigilant about this in order to ensure it is recognised and unequivocally opposed now and in the future.

“It is so important that we remember, for by doing so we respectfully and solemnly commemorate those who died or suffered at the hands of the Nazis, and we vow to do all we can to ensure that such a horror never occurs again.”

Quoting French philosopher Paul Ricoeur, “to be forgotten is to die twice”, he said responsible human beings have a duty to preserve the memory of the many people whose lives were taken in such an appalling way.

“It is so important that our collective memory of events like the Holocaust is shared, passed on, that it remains prominent in our collective consciousness.”

However, he said it was depressing that the obvious parallels between the rise of Fascism in the 1930s and contemporary humanitarian and democratic crises appear to be lost on many.

A 2018 survey found that 22% of adult Americans had never heard of the Holocaust, while 41% of Americans did not know what Auschwitz was, rising to 66% of millennials.

“We in Europe cannot be complacent either,” he underlined. A 2018 survey of seven European countries found that 5% had never heard of the Holocaust, with a quarter only knowing ‘a little bit’, and awareness levels lowest among young people.

Of the rise of a Far Right, he said these movements were often galvanised by the impact of austerity policy, and they manipulated fears and insecurities “as tools of xenophobia”, seeking to excise the remnants of solidarity across the peoples of Europe, scapegoating migrants and refugees, and presenting them as a threat to the job prospects of so-called ‘native citizens’.

Ireland had been fortunate that such extremism has not gained significant support at a time when many countries in Europe and elsewhere have seen the rise of a Far Right. However, despite the gradual economic recovery, an ugly anti-migrant sentiment was attempting to rear its head in Ireland seeking to scapegoat the vulnerable in order to inflame the bewildered and angry.

“Those forms of misused nationalism and populism are a salutary reminder of just how fragile democracy is, how it can never be taken for granted, how easily it can be undermined when leaders and citizens turn away, not only from democratic rule and its discourse of respect, but proceed to deny opposing views any legitimacy, curtail civil liberties, and attempt to limit freedom of expression through undermining freedom of the press.”

“What a great failure it is that less than three generations after the catastrophe that was World War II, and given our boundless capacity for creativity and innovation, the fruits of new science and technology are being turned, not to the promotion and preservation of peace, but to the pursuit and prosecution of war, to a resile of old forms of hatred, exclusion and intolerance, to a discourse coarsened by its acceptance of aggression as the language of media and the street.”

The President said we must all have the courage to ask, “how we have come to be losing the discourse of peace to the discourse of fear, and how the international armaments industry occupies a space that should be filled by these seeking to meet the needs of sufficiency in food, shelter, education and cooperation, and indeed how we have come to accept the allocation of ecology, society and even peace to such a narrow and limited version of economy”.

After 75 years, with the visible signs of World War II largely erased from the rebuilt cities and towns of Europe, and  with fewer and fewer Holocaust survivors to tell their stories, it becomes “even more imperative that we understand the importance of remembering what led to that barbaric chapter, its consequences, and learn from it. It would be a grievous error to consign the Holocaust or the lessons that should be learnt from it to a past that was assumed to be no longer relevant in our modern world,” President Higgins stated.

He also noted that the commitment to multilateralism that resulted in the aftermath of World War II was no longer a given and that several states, “including some of the most powerful actors globally” were repudiating this multilateral order, “pursuing narrow, neo-nationalist agendas”.

He said this was regrettable and myopic, “displaying a dangerous and egregious ignorance of history” and it eroded respect for international standards and laws including the Geneva Conventions.

“As anti-Semitism, xenophobia, racism and intolerance are once again on the rise across Europe and many parts of the world, we must remember the Holocaust collectively and work together to ensure that hatred and inhumanity is not allowed to spread its dark shadow across Europe and the world.”

“We must ensure, as new generations emerge and their world becomes further removed from the horrors of the Holocaust, to tell them that they too can learn from the actions of those who, by averting their gaze, allowed it to happen, who participated in it, who facilitated it. To quote Hannah Arendt, ‘evil thrives on apathy and cannot survive without it.’”