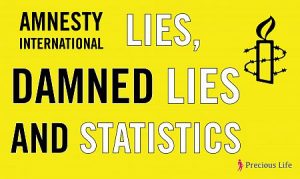 Precious Life has denounced claims made by Amnesty International that its latest survey demonstrates “overwhelming demand” for legalised abortion in cases of rape and incest, and when an unborn child has been diagnosed with a life-limiting disability in Northern Ireland.

“A measly percentage of a sample group of 1000 people does not represent the views of the people of Northern Ireland. The latest opinion poll by Amnesty International shows that this so-called ‘human rights group’ has no regard for the democratic process that respects and upholds the views of the pro-life people of Northern Ireland,” said Bernadette Smyth, director of Precious Life.

The Amnesty poll was carried out in mid-September 2016 by Millward Brown Ulster, using face-to-face interviews with a representative sample of 1,000 adults aged over 16, in several urban and rural locations across Northern Ireland. 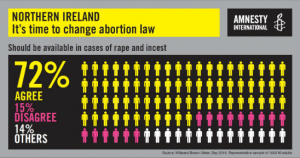 However, Bernadette Smyth claimed that in the last Northern Ireland Assembly Election in May 2016 a majority voted for pro-life politicians who would defend the right to life of all unborn children.

She also pointed to David Ford’s *MLA consultation on changing the law to allow abortion in cases of rape, incest, and diagnosis of life-limiting disability, in which she said over 99% of the responses were opposed to any change in the law.

“In April 2015 it was revealed that of the 25,320 responses to the consultation, 25,140 opposed the legalisation of abortion in cases where an unborn child has been diagnosed with a life-limiting disability,” she said.

She added that this was an “overwhelming figure” compared to some 600+ people in Amnesty’s survey who said they support abortion in the case of life-limiting disabilities.

“Amnesty International uses these opinion polls in [an] attempt to override the united and unyielding conviction of the people of Northern Ireland that every human being, born or unborn, has an unconditional right to life. But Amnesty International can’t be taken seriously; it is an organisation claiming to be a ‘human rights group’ while campaigning for the legalised destruction of unborn children,” concluded Bernadette Smyth.

In April 2015 the Northern Ireland Department of Justice published responses to the David Frost consultation in a report titled: The Criminal Law On Abortion: Lethal foetal abnormality and sexual crime Response to the Consultation and Policy Proposals.

Its summary of responses states that there were:
•712 individually written responses – 579 opposed change, 133 supported;
•65 responses from representative organisations and interested groups – 47 supported change, 18 were against;
•921 letters opposing change written in support of seven lobby campaigns which may have been organised by individual churches or faith groups;
• 23,622 petition signatures opposing change. The Project Love petition was organised by Every Life Counts Ireland. It included 18,000 postcards delivered to the Department by Precious Life, a further 2,197 sent directly to the Department, and 3,425 signatures to the electronic version of the petition on CitizenGo.org website.

Amnesty International stated that its survey, published on 18 October, shows “overwhelming support from all religious backgrounds and political affiliations for a major overhaul of the region’s restrictive, 19th Century abortion laws”.

There were similarly high levels of support for reform of abortion laws in both Catholic and Protestant communities. For example, the Amnesty poll showed that 68% of respondents from a Catholic background support access to abortion in cases of rape or incest, with 17% disagreeing.  Among respondents from a Protestant background, the figures were 72% supporting increased abortion access, with just 16% disagreeing.

The new poll was published as Ministers from the Northern Ireland Executive were considering introducing changes to the law to allow abortion in cases of life-limiting disability.

Minister of Justice Claire Sugden and Minister of Health Michelle O’Neill received a report last week from an inter-departmental working group, but it had not been published when the Amnesty survey was published.
*Members of the Legislative Assembly (MLAs)