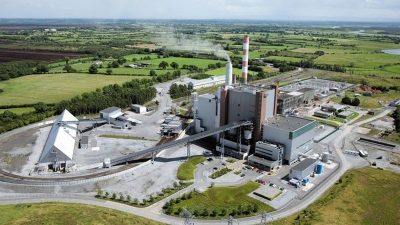 The Shannonbridge Power Station due to close in 2020 (Pic ESB).

The Bishop of Ardagh & Clonmacnois, Francis Duffy, has called for special prayers for the ESB workers, and their families, who are affected by the decision to close the peat-fired electricity generation stations at Lanesboro in Co Longford and Shannonbridge in Co Offaly.

The state-owned generating company announced on Friday that it is to close both plants in the new year. Previously, ESB had applied to convert the two generating stations from peat-burning to being fired by a mixture of peat and biomass, but their planning application for Shannonbridge was refused by An Bord Pleanála in 2018.

In addition to the 80 workers employed at the plant, there are fears that Bord na Móna workers in the Midlands region are also set to lose their jobs as they will no longer be needed to supply the two power plants with fuel. Since they began operating in the 1950s, between them Shannonbridge and Lanesboro have burned two million tonnes of peat a year.

“The news of the job losses at ESB plants in Lanesboro and Shannonbridge is a devastating blow to the employees in the midlands region, their families and to the local economy,” said Bishop Duffy. “Its personal, social and financial impact on our region cannot be underestimated. There are now very serious concerns about the consequences of this decision as it relates to the viability of Bord na Móna as an iconic Irish company. Three generations of families have been employed in these plants.

“Today, ESB workers with young families, those managing mortgages and financial commitments, and with their plans and hopes for the future, will be impacted by this decision. Seasonal work for young people attending college and opportunities for apprenticeships now seem destined to disappear.”

In addition to the prayerful support of the faithful, Bishop Duffy said he was personally available to support initiatives aimed at addressing the needs of people affected by the closure. He concluded by saying: “Finally, I call on our public representatives and government agencies to expedite their work towards making the Midlands region a place with greater opportunities for employment. In particular, State investment must address the immediate needs of those whose jobs will end in 2020.”

Recently, there have been claims that the Irish economy is starting to improve greatly, but Bishop Duffy is the third Irish bishop to issue a pastoral response to major job losses announced in recent weeks. Last month, Bishop Fintan Gavin of Cork and Ross expressed concern at the loss of 320 jobs at the Novartis plant in Ringaskiddy, and Bishop Fintan Monahan of Killaloe described the loss of 500 jobs at the Molex plant in Shannon as a devastating blow.