Home > Featured > Pray and fast for 40 days to prevent abortion

Pray and fast for 40 days to prevent abortion 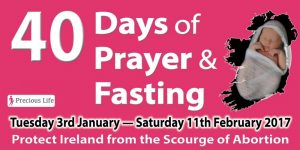 The largest pro-life group in Northern Ireland has launched forty days of “prayer and fasting” which began on Tuesday 3 January.

“Northern Ireland is facing one of its darkest hours,” Director of Precious Life, Bernadette Smyth wrote to supporters earlier this week. “Abortion could be legalised as early as February 2017 if Alliance Party MLA David Ford’s abortion bill is passed by the Northern Ireland Assembly. This bill, which began its passage through the Assembly on Tuesday 6th December, is seeking to allow the killing of babies with life-limiting disabilities at any time during pregnancy, right up to the moment of birth.”

In order to stop this evil we need “a massive revolution of prayer and sacrifice”, she wrote. “This is why I want to start 2017 with 40 Days for Life” for the “protection of Ireland from the scourge of abortion”.

She explained that fasting was not “a Christian diet”. Rather, “It is a form of physical prayer. You can fast from food, TV, alcohol, cigarettes, sweets, chocolate, etc. You can also make a donation to the work of Precious Life.”

The Forty Days for Life concludes on Saturday 11 February. 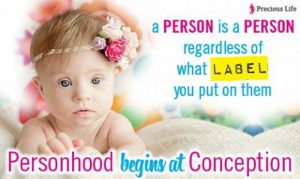 Ms Smyth also invited people to get involved in Precious Life’s ‘Personhood begins at Conception’ campaign by signing the online Petition Postcard addressed to the First Minister and Deputy First Minister, by distributing campaign leaflets, by lobbying their local MLAs and by donating to the work of the agency.

“With faith, we look forward to seeing the transformations that God will bring about to protect Ireland from the scourge of abortion. In the Most Holy Name of Jesus, we pray that Ireland is saved from the sin and crime of abortion,” she concluded.

In 1997 Bernadette Smyth saw a picture of an aborted baby. Horrified by what she had seen, and determined not to let abortion happen to other babies, she founded Precious Life, which is now Northern Ireland’s largest pro-life group. It is the only group actively working on the streets every day. “We are composed of people from all sections of the community who care deeply about unborn children and their mothers. We are non-denominational and non-party political,” she says.

According to its website, there has been a “dramatic drop in the numbers of women travelling from Northern Ireland to England for abortion” since the formation of Precious Life. They believe this is “directly attributable to our activism”. They say that “By exposing the lies surrounding abortion; by educating the public with the truth about abortion; and by campaigning against abortion – we are saving babies, mothers, and indeed this country, from the silent holocaust that is brutally destroying 50 million lives worldwide every year.”