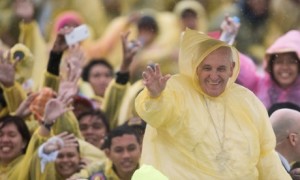 Pope Francis managed to meet survivors of typhoon Haiyan on the island of Leyte on Saturday despite stormy conditions which forced him to cut his visit short.

On Saturday morning, the second day of his visit to the Philippines, the Pope flew from the Filipino capital Manila to Tacloban.

Vatican officials revealed that the Pontiff had been advised to call off his trip in view of the weather conditions caused by an impending typhoon but he refused.

Instead his arrived earlier than planned and shortened all scheduled events enabling him to leave before the typhoon struck.

Pope Francis managed to make a very brief stop at Tacloban cathedral ahead of his departure from the island of Leyte.

Speaking after the Pope’s return to Manila, four hours before he was scheduled to, Vatican spokesman Fr Federico Lombardi said the Pope’s encounter with survivors of the typhoon represented one of the highlights of his Asian journey.

Speaking to Vatican Radio, the Director of the Vatican Press Office pointed to Pope Francis’ off-the-cuff homily in which he said “So many of you have lost everything. I do not know what to tell you. But surely he knows what to tell you! So many of you have lost members of your family. I can only be silent; I accompany you silently, with my heart…” as the central moment of this part of his visit.

“It was the moment during which we really understood his desire to be with these people in this situation” he said.

Fr Lombardi pointed out that from the beginning, the Pope had said that it was when “he saw the images of the typhoon and the disaster that he decided to come here”.

“This is actually the end of a long journey that did not begin in Manila, but in Rome just over a year ago on the day of the typhoon” he said. As many as 10,000 people lost their lives in the 2013 typhoon.

Fr Lombardi also said the Pope had been deeply moved by the affection of the Filipino people.

“You cannot be indifferent to see on the streets hundreds of thousands of people waiting to see you for hours, even if you have not the time to meet them personally, they are happy to see you and feel your presence and encouragement”.

“I think today was the most profound and intense moment of this journey,” Fr Lombardi said.

At the conclusion of Pope Francis’s day in the central Filipino cities of Tacloban and Palo, Cardinal Tagle revealed how moved Pope Francis was by the experiences of those most badly affected by the 2013 typhoon, the strongest storm ever recorded on land, which left up to a million people homeless.

Though he was forced to cut short his official programme because of another storm, Cardinal Tagle said the Pope was determined to meet first hand with the people of Tacloban and Palo, including a group of 30 survivors who were able to share their stories of suffering with him.