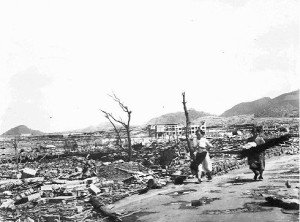 The atomic bombing of the Japanese cities of Hiroshima and Nagasaki in August 1945 was a tragic event that “still arouses horror and repulsion” many years later, Pope Francis said on Sunday.

Marking the 70th anniversary of the unprecedented bombings, which killed over 130,000 people on the first day, with as many more dying later from their wounds and radiation sickness, the Pope said the attacks have become a “symbol of the enormous destructive power of humanity when it makes a distorted use of scientific and technical progress”

He added that they served as a lasting warning to humanity that it must reject forever war and ban nuclear weapons and all arms of mass destruction.

In his address on Sunday, the Pontiff said this sad anniversary urges humanity to pray and strive for peace, to spread brotherhood throughout the world and a climate of peaceful coexistence between peoples.

“May one cry rise up from every land, ‘No’ to war and violence and ‘Yes’ to dialogue and to peace. With war one always loses. The only way to win a war is never to wage it,” he emphasised.

The Pontiff also spoke of his deep concern for the suffering of the population in El Salvador as a result of the famine, the economic crisis and growing violence.

He encouraged the Salvadorans to “persevere united in hope” and urged all to pray in order that justice and peace can flower once again in the land of the Blessed Oscar Romero.

Earlier this week, Bishop Oscar Cantu of New Mexico visited Hiroshima on behalf of the US bishops.

Following a Mass at the Catholic Memorial Cathedral for World Peace, Bishop Cantu spoke to the congregation about the US bishops’ efforts to ensure that the world will experience no more Hiroshimas.

According to CNS, the bishop said that since the end of the Cold War in 1991, Americans think little about nuclear weapons and the threat they pose.

The recent agreement negotiated by the several countries with Iran “puts nuclear weapons in the forefront of political debate after years of being an afterthought in the minds of most Americans,” he said.

For many of his generation, Bishop Cantu said, “the return to a serious discussion of nuclear disarmament may seem like an outdated exercise. Sadly, it is not”.