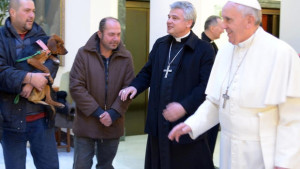 Next Monday (17 November) work will begin in the Vatican to renovate public bathrooms for pilgrims to St Peter’s Square incorporating a bathroom with three showers for the homeless.

The provision of washing facilities for the homeless is being carried out on the orders of Pope Francis who has expressed his concern for the homeless sleeping rough near St Peter’s Square.

Ten parishes in Rome have also make similar provision for the homeless.

The papal Almoner, Mgr Konrad Krajewski, who is responsible for charitable acts ordered personally by the pope, told the press, “We are not doing anything extraordinary because bathrooms and showers are the ABC of a community.”

He continued, “In Rome, all the public toilets have been shut and it would be only necessary to close your bathroom at home for two days to understand what it means to not be able to wash.”

He said he had spoken to the Mayor of Rome Ignazio Marino, who is a doctor, about this and asked where should these people go to relieve themselves?

The Polish bishop said, “This is just helping in an intelligent way, when I speak to politicians they speak of so many things but they don’t touch on the real questions and meanwhile so much money is thrown away.”

He recalled a meeting at the beginning of October, which he told Vatican Insider opened his eyes.

“I had just come out of the Church of the Holy Spirit, where I go to hear confessions. In the Via della Conciliazione I met Franco, a homeless man. He told me that he was turning fifty that day and that he had been living on the street for ten years.”

Mgr Krajewski invited Franco to have dinner with him at a restaurant.

However, Franco declined. “Father, I can’t go to the restaurant with you because I smell,” he explained.

“I took him with me nonetheless. We went to a Chinese restaurant,” the Polish bishop said and added, “During dinner, he explained to me that you can always find some food in Rome. What is missing is places to wash.”