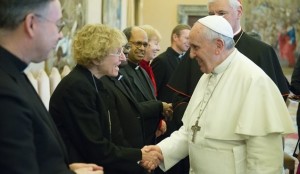 Pope Francis on Friday met with members of the International Theological Commission at the beginning of its new five-year mandate.

In his address, the Pontiff underlined the mission of the Commission, “to study doctrinal problems of great importance, especially those which present new points of view, and in this way to offer its help to the Magisterium of the Church.”

This mission, he said, requires not only “intellectual competence, but also spiritual dispositions.”

Among those spiritual dispositions, the Pope said he wanted to draw particular attention to the importance of listening.

The theologian, he said, is first of all a believer who hears the word of God. But the theologian must also “humbly listen” to “‘what the Spirit says to the Churches’ through the diverse manifestations of the lived faith of the Church.”

In particular, he noted the significantly greater presence of women on the Commission: “a presence that is an invitation to reflect on the role that women can and should occupy in the field of theology”, and the contribution that they bring to “the intelligence of faith.”

“In virtue of their feminine genius,” he said, “female theologians are able to take up… certain unexplored aspects of the unfathomable mystery of Christ.”

He invited the Commission “to draw greater profit from this specific contribution of women to the understanding of the faith.”

Pope Francis also called attention to the international character of the Commission, which he said “reflects the catholicity of the Church.

“The diversity of points of view should enrich the catholicity without harming the unity,” he said.

“The unity of Catholic theologians is born from their common reference to one sole faith in Christ and is nourished by the diversity of gifts of the Holy Spirit.”

“From this foundation and in a healthy pluralism, various theological approaches, developed in different cultural contexts and with the diversity of the methods used, cannot ignore each other, but in theological dialogue ought to reciprocally enrich and correct one another.”

Concluding his address, the Holy Father looked to the example of the Blessed Virgin Mary who, “under the guidance of the Holy Spirit and with all the resources of her feminine genius… has not ceased to enter ever more into ‘all truth.’”

He prayed, “May the Madonna, the teacher of authentic theology, obtain for us, with her maternal prayer, that our charity “may increase ever more and more in knowledge and every kind of perception.”

Finally, before blessing the assembled theologians, Pope Francis led the group in the recitation of the Hail Mary.