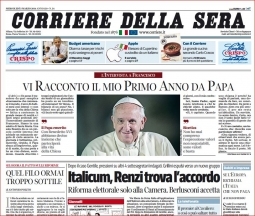 Less than two weeks from the anniversary of his election as bishop of Rome, Pope Francis describes himself as, “A man who laughs, cries, sleeps well and has friends like everyone else.”

In a wide-ranging interview with the editor-in-chief of the Italian daily, Corriere della sera, Ferruccio De Bortoli, published on Wednesday, the Holy Father reflects on many themes.

They include bioethics, Church governance, and his friendship with his predecessor, Pope Emeritus Benedict XVI.

Some of his most significant comments concern the role of women in the Church.

“It is true that women can and ought to be more present in the places where the Church’s decisions are made.

He contines, “This, however, I would call a promotion of a ‘functional’ type. Only, in this way, we do not get very far. We need to consider that the Church takes the feminine article,” he said, “She is feminine in her very origins.”

Asked whether it might perhaps be time to take up once again the question of artificial means of birth control, Pope Francis praised his predecessor, Paul VI, who authored the encyclical Humanae Vitae.

“His genius proved prophetic: he had the courage to stand against the majority, to defend moral discipline, to exercise a ‘brake’ on the culture, to oppose both present and future neo-Malthusianism.”

“The question is not that of changing doctrine, but of going into the depths, and ensuring that pastoral efforts take into account people’s situations, and what is possible for people to do.”