Pope Francis is Time Magazine’s Person of the Year 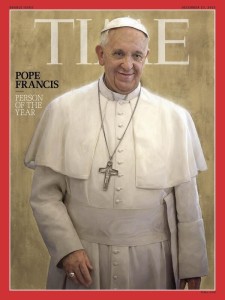 Time Magazine has selected Pope Francis as its Person of the Year for 2013 citing his focus on compassion and his role as a new voice of conscience.

On the high profile magazine’s website, managing editor, Nancy Gibbs, explains why Pope Francis is TIME’s choice for Person of the Year.

“What makes this Pope so important is the speed with which he has captured the imaginations of millions who had given up on hoping for the church at all,” the Time editor states on the magazine’s website.

“In his nine months in office, he has placed himself at the very centre of the central conversations of our time: about wealth and poverty, fairness and justice, transparency, modernity, globalisation, the role of women, the nature of marriage, the temptations of power.”

“At a time when the limits of leadership are being tested in so many places, along comes a man with no army or weapons, no kingdom beyond a tight fist of land in the middle of Rome but with the immense wealth and weight of history behind him, to throw down a challenge.”

“The world is getting smaller; individual voices are getting louder; technology is turning virtue viral, so his pulpit is visible to the ends of the earth. When he kisses the face of a disfigured man or washes the feet of a Muslim woman, the image resonates far beyond the boundaries of the Catholic Church.”

“And yet in less than a year, he has done something remarkable: he has not changed the words, but he’s changed the music. Tone and temperament matter in a church built on the substance of symbols—bread and wine, body and blood—so it is a mistake to dismiss any Pope’s symbolic choices­ as gestures empty of the force of law.”

“Behind his self-effacing facade, he is a very canny operator.”

“He makes masterly use of 21st century tools to perform his 1st century office,” the magazine said.

“This new Pope may have found a way out of the 20th century culture wars, which have left the church moribund in much of Western Europe and on the defensive from Dublin to Los Angeles,” Nancy Gibbs added.

Vatican spokesman, Fr Federico Lombardi, said that the award was “unsurprising, considering the resonance and very widespread attention given to the election of Pope Francis and the beginning of his pontificate.”

He said it was “a positive sign” that an influential media outlet had selected a religious leader.

Fr Lombardi highlighted that Pope Francis is not anxious for public acclaim, but insofar as his selection by Time shows that his message is being heard, “he will certainly be glad,” hei said.