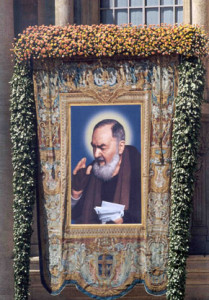 Pope Francis has sent his condolences and prayers to the family and friends of 38 pilgrims who died in a tragic bus accident on the way home from a Padre Pio shrine in Italy last Sunday.

“Profoundly saddened by the news of the tragic accident, the Pope raises fervent prayers for the souls of the deceased and conveys his deepest condolences to their families,” a telegram sent by Secretary of State Cardinal Tarcisio Bertone on the Pope’s behalf stated.

The message said the Pontiff was also praying for the “rapid recovery of the injured, and imparts the comfort of an apostolic blessing as a sign of consolation for those who mourn the loss of their loved ones.”

The families of the 38 victims gathered on 30 July at the Alfonso Trincone sports hall in the Monterusciello neighborhood for a group funeral, presided over by Bishop Gennaro Pascarella of Pozzuoli.

Approximately 4,000 people attended at the funeral at which Bishop Pascarella said, “This is the time for solidarity, closeness, made of concrete actions. It is a drama that involves the whole civil and religious community.”

Bishop Pascarella visited Monteforte Irpino, the town closest to the accident, and also announced that the diocese’s Caritas group will raise funds for the victims.

The funeral was attended by Italian Prime Minister Enrico Letta, who declared Tuesday a national day of mourning.

The accident occurred on Sunday evening when a bus full of pilgrims returning from the St Padre Pio shrine in Pietrelcina  failed to brake on a curve and crashed through a concrete guardrail, plummeting almost 100 feet into a ravine below. The cause of the accident is still not known.

No Irish pilgrims were involved although every year hundreds of Irish devotees visit Padre Pio shrines in San Giovanni and in Pietrelcina, the birthplace of St Pio.

Irish pilgrims also visit Our Lady’s shrine in Knock for the annual pilgrimage devoted to Padre Pio and organised by the Irish Office for St Pio.

The first pilgrimage took place in 1979, one week before Pope John Paul II visited Knock and it continues each year in September as close as possible to the feast day of St Pio (23 September).

Last year around 1,000 people attended this pilgrimage in Knock and this year the pilgrimage takes place on Sunday 15 September.

Eileen Maguire, director of the Irish Office for St Pio, said at the time that it was great to see the continued success of the annual pilgrimage and the “tremendous interest in Padre Pio in Ireland”.

Every week thousands of his Irish devotees quietly gather in Padre Pio’s name for prayer meetings in tiny chapels, community halls, living rooms or kitchens with ‘standing room only’, according to Colm Keane who published a book in 2007 titled ‘Padre Pio: The Irish Connection’.