Home > News > Pope Francis highlights the dignity of the sick

Pope Francis highlights the dignity of the sick 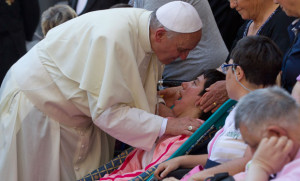 Time spent with the sick is holy time Pope Francis has said in his message for World Day of the Sick which will be celebrated on 11 February 2015.

In his message released on Tuesday, the Pontiff said that this time with the sick is a way of praising God who conforms us to the image of his Son, who “came not to be served but to serve, and to give his life as a ransom for many”.

He said today’s world occasionally forgets the special value of time spent at the bedside of the sick, since we are in such a rush; caught up in a frenzy of doing and producing that we forget about giving ourselves freely, taking care of others, and being responsible for others.

“Behind this attitude there is often a lukewarm faith which has forgotten the Lord’s words: ‘You did it unto me’ (Mt 25:40),” the Pope stated.

He also warned that “a great lie lurks” behind phrases which “so insist on the importance of ‘quality of life’ that they make people think that lives affected by grave illness are not worth living.”

The message for world day of the sick underlines “the absolute priority” of ‘going forth from ourselves toward our brothers and sisters’ who are ill.

Wisdom of the heart, Pope Francis states, means showing solidarity with our brothers and sisters while not judging them.

“Charity takes time. Time to care for the sick and time to visit them. Time to be at their side like Job’s friends: ‘And they sat with him on the ground seven days and seven nights, and no one spoke a word to him, for they saw that his suffering was very great’ (Job 2:13).”

However, Job’s friends harboured a judgement against him: they thought that Job’s misfortune was a punishment from God for his sins.

In his message, the Pope states that true charity is a sharing which does not judge, which does not demand the conversion of others; “it is free of that false humility which, deep down, seeks praise and is self-satisfied about whatever good it does.”

He added, “Job’s experience of suffering finds its genuine response only in the cross of Jesus, the supreme act of God’s solidarity with us, completely free and abounding in mercy.”

This response of love to the drama of human pain, especially innocent suffering, remains for ever impressed on the body of the risen Christ; his glorious wounds are a scandal for faith but also the proof of faith.

And even when illness, loneliness and inability make it hard for us to reach out to others, the Pope notes, the experience of suffering can become a privileged means of transmitting grace and a source for gaining and growing in sapientia cordis.

“People immersed in the mystery of suffering and pain, when they accept these in faith, can themselves become living witnesses of a faith capable of embracing suffering, even without being able to understand its full meaning.”

Pope Francis has entrusted World Day of the Sick 2015 to the “maternal protection” of Mary.