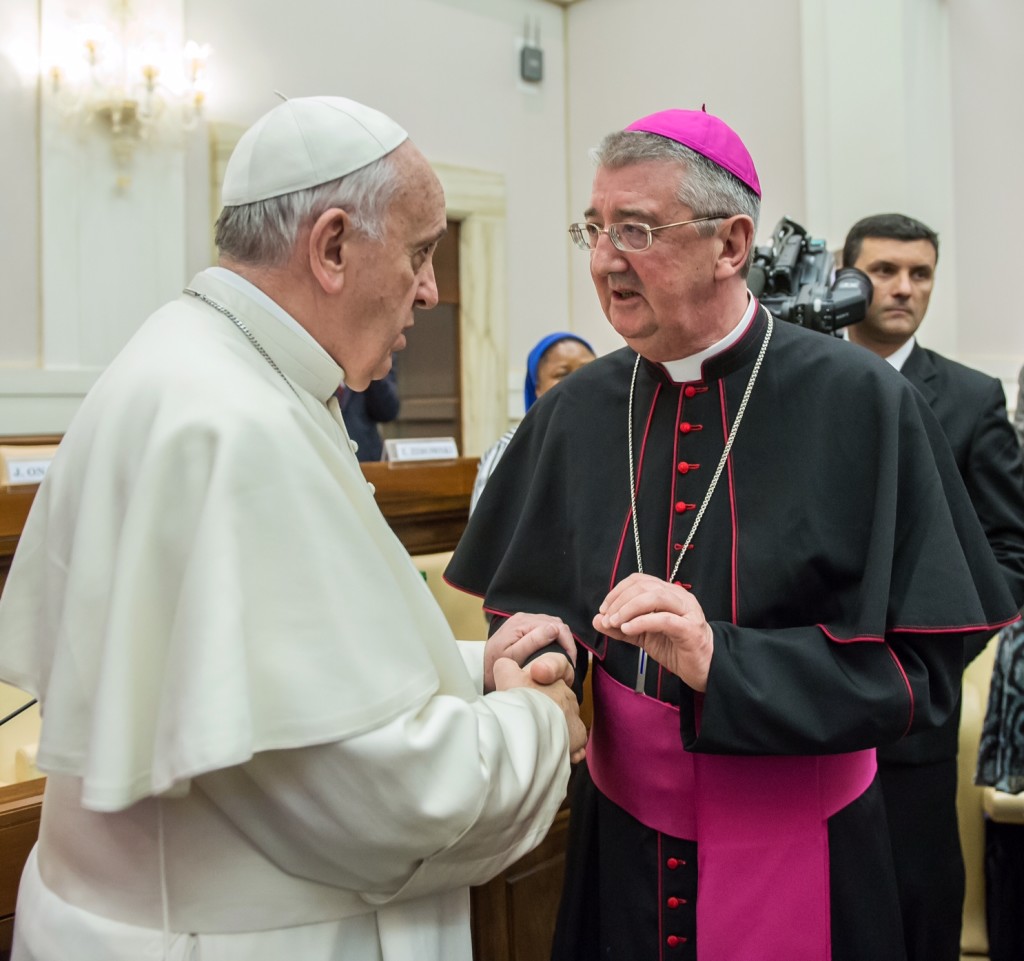 By Iacopo Scaramuzzi of Vatican Insider

Pope Francis has condemned human trafficking as “a crime against humanity” on the second day of a Vatican conference which brought together social workers, members of police forces from across the world and Church representatives addressing the issue.

On Thursday morning, Pope Francis – who has been dealing with trafficking since his days as Archbishop of Buenos Aires – went to the Pontifical Academy of Sciences to attend the conference in person and meet four women who were forced into prostitution in the past.

“This is an important meeting but it is also a gesture by people of goodwill who want to shout ‘enough!’” the Pontiff said in a brief speech.

The conference, which was entitled ‘Combating Human Trafficking: Church and Law Enforcement in partnership’ began on Wednesday and finished on Thursday. It was organised by the Bishops’ Conference of England and Wales.

In his address to participants, Pope Francis said: “Human trafficking is an open wound on the body of contemporary society, a scourge upon the body of Christ. It is a crime against humanity.”

“The very fact of our being here to combine our efforts means that we want our strategies and areas of expertise to be accompanied and reinforced by the mercy of the Gospel, by closeness to the men and women who are victims of this crime.”

“Our meeting today includes law enforcement authorities, who are primarily responsible for combating this tragic reality by a vigorous application of the law. It also includes humanitarian and social workers, whose task it is to provide victims with welcome, human warmth and the possibility of building a new life.”

“These are two different approaches, but they can and must go together. To dialogue and exchange views on the basis of these two complementary approaches is quite important. Conferences such as this are extremely helpful, and, I would say, much needed.”

“I believe that one important sign of this is the fact that, one year after your first meeting, you have regrouped from throughout the world in order to advance your common efforts. I thank you for your readiness to work together.”

“I pray that our Lord will assist you and that Our Lady will watch over you.”

At the end of the conference, Pope Francis held a private meeting with four former sex slaves from Argentina, Chile, Hungary and the Czech Republic.

When he was Archbishop of Buenos Aires, the future Pope sought to assist prostitutes trapped by trafficking out of their cycle of exploitation.

The Archbishop of Westminster, Cardinal Vincent Nichols, chaired the conference, the third on this theme since the first meeting in 2012 and a recent anti-human trafficking meeting attended by various religious leaders.

Vatican Gendarmerie chief Domenico Giani and Italian police chief Alessandro Pansa were among those present at the conference. Archbishop Diarmuid Martin of Dublin was also a participant at the conference and met the Pope on Thursday.

In a joint declaration signed by all present, participants committed to “combat human trafficking ad slavery together.”

In a press conference held in the Vatican newsroom after today’s meeting, London’s Metropolitan Police Commissioner, Sir Bernard Hogan-Howe, explained that with all the religious orders it has across the world- in countries at the start and end of human trafficking routes – the Catholic Church “has a vast network to work with.”

Cardinal Nichols recalled the example set by British police, who are working alongside nuns to put an end to prostitution.

Over 2.4 million people around the world fall victim to human trafficking according to Vatican Radio, bringing criminals profits worth an estimated 32 billion dollars each year.

Participants at the conference were invited to dinner yesterday evening by the Vatican Secretary of State, Cardinal Pietro Parolin.

Today more victims gave testimonies, including actress Mira Sorvino, a UN ambassador who tweeted: “Delivered my speech at the Human Trafficking conference at the Vatican, then moved to tears by survivor testimony” and the Pope gave a short speech.

Speakers at the press conference moderated by Vatican spokesman Fr Federico Lombardi, included: Cardinal John Olorunfemi Onaiyekan, Archbishop of Abuja, Nigeria (“the fact that the Pope came to us instead of waiting for us in the Apostolic Palace made us see him as one of the group”), the Spanish nun Aurelia Agredano Pérez, Vice President of the Congregation of the Adoratrices, Handmaids of the Blessed Sacrament and of Charity.

Sr Pérez works in 23 countries across four continents, helping to get young girls out of prostitution.

The conference’s participants – who now call themselves the ‘St Martha’s group’ “since their first meeting was held in St Martha’s House – where Pope Francis’ resides – will meet again in London in November.