Home > News > Pope Francis has lunch with the poor in Florence

Pope Francis has lunch with the poor in Florence 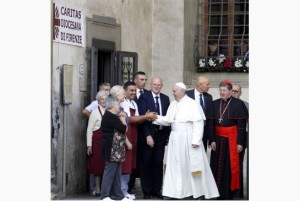 Pope Francis is greeted as he leaves Florence’s Caritas charity organisation headquarters where he had lunch on Tuesday. Photo: Courtesy www.thestar.com

On his visit to the city of Florence on Tuesday, Pope Francis had lunch at St Francis’ Soup Kitchen with 60 of the city’s poor, many of whom are coping with the loss of their job and home.

The Pope was given a meal voucher when he arrived at the Caritas-run kitchen and ate off a plastic plate like all those gathered with him.

Before lunch, the Pontiff met briefly with the sick and some disabled in the Basilica of Annunciation.

After individually greeting those present, the Pope recited the Angelus prayer with them before walking over to St Francis soup kitchen.

In his major address of the one-day visit to the Tuscan city, the Pope called on the Italian Church to “be restless, ever closer to the abandoned, the forgotten, the imperfect”.

Addressing delegates attending the fifth national convention of the Italian Catholic Church in the emblematic Florentine Cathedral of Santa Maria del Fiore, he appealed for a “joyful Church with a mother’s face, one that understands, accompanies, caresses. You also must dream of this Church, believe in it, renew with freedom”.

A Christian’s humanity, he said, is not narcissistic or self-centred, but always goes out to others, which leads us always to work and to fight to make the world a better place.

A Christian is happy because he has within him the joy of the Gospel. Jesus shows us the path to happiness in the Beatitudes, which “begin with a blessing, and end with the promise of consolation.”

He called on the Italian Church to renounce power, its fixation with structures, the myth of relevance in order to become the “church of the beatitudes” that can “make the world a better place” in dialogue with all people of good will.

He also appealed to young people to overcome their apathy, asking them to be “builders of Italy, to set to work for a better Italy. Don’t watch life from the balcony, but get stuck in, immerse yourselves in the broad social and political dialogue,” Pope Francis said. “Let the hands of your faith reach up to heaven,” he urged.

The Pope also heard the testimony of a woman baptised in adulthood, a remarried couple and an Albanian immigrant who had become a priest in Florence.

He asked delegates to adopt “the spirit of the great sea voyagers who were passionate about navigating on the open seas and unafraid of the confines and storms”.

“Let it be a Church that is free and open to the challenges of the present, never on the defensive for fear of losing something,” he concluded.

Acknowledging the temptations the Church faces, he mentioned Pelagianism and Gnosticism.

“Pelagianism leads us to have faith in structures, in organisations, in plans that are perfect because they are abstract.”

The reform of the Church does not mean simply coming up with yet another plan to change structures, but instead means “being grafted onto and rooted in Christ, [the Church] allowing herself to be lead by the Spirit.”

Another temptation, Gnosticism, “leads to trusting in logical and clear reasoning, which, however, loses the tenderness of the flesh of the brother.”

The fascination with Gnosticism, he said, “is that of “a purely subjective faith whose only interest is a certain experience or a set of ideas and bits of information which are meant to console and enlighten, but which ultimately keep one imprisoned in his or her own thoughts and feelings.”

The Pope noted that Italy has many great saints, such as St Francis of Assisi and St Philip Neri, whose example can help people live the faith with humility, disinterest, and joy.

He also gave the example of Don Camillo, a famous Italian literary character. The Pope said he was struck at how the fictional priest always united “the prayer of a good pastor” with the evident closeness to his people.

He encouraged Bishops to always be pastors, saying, “This will be your joy.”  He spoke, too, about the importance of the “social inclusion” of the less fortunate, recalling the teaching of St John Paul II and Benedict XVI on the doctrine of the preferential option for the poor.

Earlier in the city of Prato, Pope Francis said the Christian faith was revolutionary as it called on followers to work for a better world.

“Our duty is to work to make this world a better place and fight. Our faith is revolutionary for the impulse that comes from the Holy Spirit. We must follow this impulse to come out of ourselves, to be men according to the gospel of Jesus.”