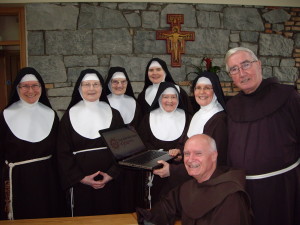 A special year long religious celebration launched this month by Poor Clare nuns and Franciscans friars in Ireland has received a major boost with the news that Pope Francis has bestowed his seal of approval on the event.

Cardinal Mauro Piacenza, who holds the Church’s title of the Cardinal Penitentiary, has informed the Irish friars and the Galway city-based nuns that the Pope has decreed that a plenary indulgence will be granted to the Irish faithful who participate in devotions honouring the Holy Name of Jesus over the course of 2014.

Pope Francis’s interest in the Irish year of devotion is believed to be linked to his special affinity with the Franciscan charism and his own devotion to the Holy Name of Jesus. On election last March, he chose to include the monogram IHS in his papal crest.

In addition to the granting of a plenary indulgence, the Pope has also decreed that the celebrations will have the status of a jubilee year.

Responding to the news, the mother abbess of the Poor Clares in Galway, an enclosed community, said they were “thrilled”.

Sr Colette told CatholicIreland.net that the jubilee was even bigger than the indulgence as it was “a sign of God’s lavish mercy. It is like the celebration of a wedding anniversary.”

“We never dreamed that this centenary would get such recognition from Pope Francis. We had applied for the granting of a special indulgence but the granting of Jubilee Year status is far beyond what we expected,” she added.

The Roman office responsible for granting indulgences, stated that, Pope Francis … “most willingly expressing his paternal benevolence, grants a Jubilee Year with the attached Plenary Indulgence”.

In the same week that the jubilee status and indulgence were granted, Pope Francis, whose papal coat of arms prominently features the Holy Name monogram, tweeted, “We cannot think of a Church without joy. This is the joy of the Church: announcing to all the Name of Jesus”. 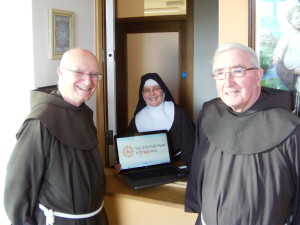 The news of the Jubilee Year and indulgence came as the Poor Clare Sisters were preparing for an opening Mass for the Year of the Holy Name.

The Mass took place on 3 January, the Feast of the Holy Name of Jesus, with many branches of the wider Franciscan family present, as well as family and friends.

Fr Hugh McKenna, Minister Provincial of the Franciscan Order, believes that the Year is an opportunity for Christians to rekindle in their hearts love for the Holy Name of Jesus.

“We invoke the Name of Jesus so easily and very often so carelessly without realising the significance and power of this Name that has been venerated down through the centuries,” he said.

Fr McKenna noted in his homily that “from the earliest days of Christianity people began to realise that the Name of Jesus was not merely a series of letters, but that it had an intrinsic divine power.”

“Wherever the Name of Jesus is spoken or displayed the power of Jesus can be called upon to obtain peace, holiness and as a protection from evil,” he said.

The idea of celebrating this special year came about as the result of a discovery by the Poor Clare nuns that a wave of devotion to promote the Holy Name of Jesus began after a retreat in their monastery given by Franciscan friar, Fr Francis Donnelly, in January 1914.

The Poor Clare Sisters no longer have that image from 1914 but they decided to erect another image of the Holy Name of Jesus, an icon written by Lucho Alvarez, a local man and friend of the Community for the 2014 year of devotion.

This icon was ceremonially erected during the opening Mass for the Year of the Holy Name. The Sisters hope the icon will become a focal point for renewing devotion.  “It is truly beautiful and in some way reflects the beauty of God,” Sr Colette said.

“This is one of the roles of icons in the Church. They are much more than religious paintings:  they are a meeting point between heaven and earth and invite us to enter into the mystery they depict.”

“In the case of the Icon of the Holy Name, it is to invite us into a deep intimacy and friendship with the person of Jesus. Only this can fulfil the deepest longings of our hearts.” 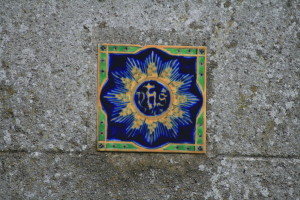 It was Fr Donnelly who introduced blue YHS tiles that can be seen over the doors of many older houses in Galway, Cork and Limerick where he ministered and in other places such as Ennis, Co Clare and Tuam, Co Galway.

The tiles depict an abbreviation of the name of Jesus in Greek and they were placed above the doors of houses in order invoke God’s blessings on the occupants.

“When we call on the Name of Jesus, He is with us and it is His Presence that gives us the graces we need to cope when we are going through difficult times,” Sr Colette explained.

“We believe this devotion is very relevant to the times we are living in. People are really struggling with things like sickness, financial worries and depression and are looking for serenity in their lives. Simply calling on the Name of Jesus with trust, from the heart, brings His Presence and His power into the situations in our lives that we struggle with,” she continued.

The Sisters have also composed a hymn for the year and intend to make it available free to download from their website while a website explaining the devotion has been set up: http://www.holyname.ie/

“The collaboration between Poor Clares and Franciscans goes back to thirteenth century Assisi,” according to Sr Colette.

“St Francis was very aware that prayer is the soul of the Church’s mission and often asked St Clare to pray for various intentions. In our own day, successive popes have reminded the Church at large of the crucial role contemplative nuns’ play in the evangelising mission in the Church. This is why St Therese of Lisieux was declared a patroness of the missions along with St Francis Xavier.”

Down the centuries the saints recognised the great power of the Holy Name.  St Bernard of Clairveaux, for instance, said that the Name of Jesus “is medicine”.

“Is any one among you sad? Let Jesus come into his heart, and the mouth echo him, saying Jesus! and lo! the light of that Name disperses every cloud, and brings sunshine back again.  …is despair driving you into the snare of death? Invoke the Name of life, and life will come back to the soul.” (St  Bernard)

In the 14th century the great English mystic Richard Rolle wrote extensively on the power of the Holy Name. He said, “If you think on the name Jesus continually and hold it stably, it purges your sin and kindles your heart.”

An indulgence is the remission of the temporal punishment due for sin of which the guilt has been forgiven and it derives from the treasury of graces won by Christ and the unending mercy of God.

Writing about indulgences in the document in preparation for the Great Jubilee 2000, Blessed John Paul said, ‘Reconciliation with God does not mean that there are no enduring consequences of sin from which we must be purified.

It is precisely in this context that the indulgence becomes important, since it is an expression of the “total gift of the mercy of God”.  With the indulgence, the repentant sinner receives a remission of the temporal punishment due for the sins already forgiven as regards the fault.’

For more information on the Jubilee Year, see www.holyname.ie