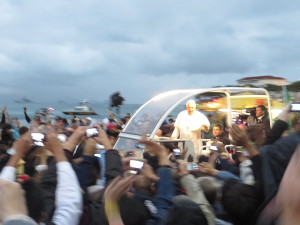 Yesterday in Rio, Pope Francis met leading members of Brazilian society and spoke of the need for “constructive dialogue” in these times.

“Between selfish indifference and violent protest, there is always another possible option, that of dialogue,” the Pontiff said.

This, Pope Francis underlined was the only way for individuals, families and societies to grow. Fraternal relations between people and cooperation in building a more just society are not, he said, some vague utopian ideals but the fruit of a concerted effort on the part of all, in the service of the common good.

Pope Francis also met clergy, seminarians and Religious and urged them to respond to the call of God, to proclaim the Gospel and promote a culture of encounter in their lives and ministry.

In his homily at Mass on Saturday at Rio de Janeiro’s Cathedral of Saint Sebastian, the Pope commented on these three aspects of their vocation, indicating that they are essential for evangelisation.

He also challenged Religious to look “courageously…to pastoral needs, beginning in the outskirts, with those farthest away… those who do not…go to church.”

While the culture of exclusion and rejection is spreading, the Pope warned, Religious must promote “a culture of encounter.”

The Pope invited Religious to go against the tide in a society where the elderly and children are “unwanted” and “there is no time for that poor person on the edge of the street.”

As well as the high profile large scale meetings in Rio with the Pope, a number of more intimate encounters have been taking place as part of World Youth Day.

One such gathering involved a meeting of 150 young people in a first WYD meeting for those from the monotheistic religions.

Catholic, Jewish and Muslim young people  met at the auditorium in the PUC University for a seminar sponsored by the Interreligious Youth of Rio de Janeiro (JIRJ) in order to celebrate “unity in diversity” and put dialogue into practice.

The organisers decided not to offer refreshments during the interval of the meeting out of respect for the Muslims in teh group who are currently fasting for Ramadan.

Within the meeting, those wearing T-shirts of various parishes or Catholic movements, mixed with Jews wearing the kipa and Muslims girls wearing the hijab.

Fernando Celino from the Muslim Beneficent Society of Rio de Janeiro spoke of his experience of interreligious dialogue.

“I started going to the Commission for Combating Religious Intolerance, which met at an umbanda”, he explained. “Although I never felt any prejudices against other religions, this meeting helped overcome certain stereotypes I had in my mind.”

“From there, we recognise ourselves as brothers and sisters, ready to love our neighbour.”

Rodrigo Baumworcel from the Hillel Jewish Association, said, “Prayer serves as a bridge between religions.”

Another aspect of WYD is the thousands of parish, diocesan and other groups taking part.

Among these groups in Rio was 11 pilgrims from Ireland and England who travelled there with the Missionaries of the Sacred Heart.

Writing in a blog about his WYD experience, Chris Tuohy described the crowds and the enthusiasm which greeted the arrival of “Papa Fancisco” at the opening ceremony.

“Upwards of two million young and proud Catholics stood shoulder to shoulder the entire length of Copacabana beach to hear and see what the Pope had to offer them,” he wrote.

“It was not his words that impressed most, rather it was his humble manner and the hug he had for one Australian girl who lost her place on the welcome she was reading and began to cry.”

“That simple act of love, reassuring her and taking the time to speak to her spoke more about our Pope and our faith than a thousand words could.”

He concluded: “The Church is truly alive here.”