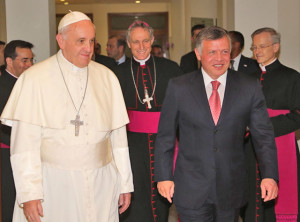 Pope Francis and King Abdullah II of Jordan in Amman.

At the start of his three-day visit to the Middle East, Pope Francis was welcomed by King Abdullah II of Jordan in Amman on Saturday, where he called for an “urgent” solution to the Syrian conflict.

Speaking at the Royal Palace in the Jordanian capital, the Pontiff praised the country’s generous welcome to “great numbers” of Palestinian, Iraqi and Syrian refugees.

In his speech, he also called for more respect for religious freedom, calling it “a fundamental human right”.

“I cannot fail to express my hope that it will be upheld throughout the Middle East and the entire world,” he said.

He thanked Jordan for its “efforts to seek lasting peace for the entire region” and said this would also require a “just solution to the Israeli-Palestinian conflict”.

Later, the Pontiff celebrated Mass at a stadium in Amman and meet Syrian refugees. The UNHCR estimates that 600,000 of Jordan’s 1.3 million refugees are from Syria.

In his homily the Pope said people need to overcome their differences rooted in political thinking, language, culture and religion.

“Peace is not something which can be bought; it is a gift to be sought patiently and to be ‘crafted’ through the actions, great and small, of our everyday lives.”

“The way of peace is strengthened if we realise that we are all of the same stock and members of the one human family; if we never forget that we have the same heavenly Father and are all his children, made in his image and likeness,” the Pope said.

Today, Pope Francis begins his two-day visit to the West Bank and Israel.

He will travel to Bethlehem in the West Bank and preside over Mass in Manger Square, near the site where Jesus is believed to have been born.

He will also meet the current Orthodox leader, Ecumenical Patriarch Bartholomew, and they will sign a declaration of friendship.

His schedule on Monday is set to include a visit to the al-Aqsa mosque complex in Jerusalem’s Old City followed by the Dome of the Rock and the Western Wall.

The Pope is accompanied by a rabbi and an imam – friends from his native Argentina.

Archbishop Petar Rajic, head of the Vatican embassy in Kuwait told Al Jazeera, “Pope Francis is telling the world that we can all go to Jerusalem together and worship there, making it a common pilgrimage for all faithful.”

The Pope’s journey marks the 50th anniversary of the historic meeting in Jerusalem between Pope Paul VI and the head of the Orthodox Church, Patriarch Athenagoras.

The meeting ended 900 years of separation and enduring antagonism between the Eastern and Western branches of Christianity.

Pope Francis will be the fourth leader of the Roman Catholic Church to visit Jerusalem, after Popes Paul VI, John Paul II and Benedict XVI.