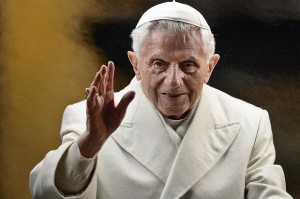 A former student of Pope Emeritus Benedict XVI has described the retired pontiff as “in good form” but criticised recent claims of a mystical experience as “absurd”.

Fr Vincent Twomey, who studied under the then Professor Ratzinger at the University of Regensburg in the 1970s, met his former doctoral supervisor at a Mass to conclude this year’s annual Ratzinger Schülerkreis which was held at Castel Gondolfo 29 August to 2 September.

The retired pope had chosen the featured speaker, French historian Remi Brague, and the topic of discussion: ‘The Question of God Against the Background of Secularisation.’

It is the first year that Benedict XVI has not taken part in the proceedings of the conference but he still met over 50 of his former students and members of the junior Ratzinger Schülerkreis at the concluding Mass.

“I was just so pleased to see him looking so well. He has got thinner but he looks healthier, I would think. But he is an old man, there is no doubt about that,” Fr Twomey told CatholicIreland.net Referring to the retired pontiff’s use of a stick, Fr Twomey said this was to make sure that he doesn’t fall.

In relation to the report by the Rome-based news agency Zenit that the retired Pontiff said he had a “mystical experience” in which he felt that the Holy Spirit was intimating to him that he should retire, Fr Twomey said it was not even discussed among the participants attending the Schülerkreis and certainly wasn’t given any credence.

Last week, Archbishop Georg Ganswein, the Prefect of the Papal Household who also acts as a private secretary to Pope Emeritus Benedict XVI, responded to the report by saying “It was invented from the alpha to the omega.”

The Mass to conclude the 2013 Ratzinger Schülerkreis was concelebrated by the priest members of the Pope Emeritus’ former students at a chapel inside the Vatican City State’s governing office.

“It wasn’t held in his monastery but behind St Peter’s in the Governorate – the administrative centre for Vatican City. It has a beautiful chapel with plenty of room for 100 people. We went in by bus. We concelebrated with him and he preached a very beautiful sermon without notes on Sunday’s reading”, Fr Twomey recalled.

“Evidently he was glad to see us and we were glad to see him,” the Divine Word Missionary priest said. “He greeted every single one of us individually ahead of Mass, all 54 of us plus a few others who happened to be there. Each one had a short time with him and he spoke to us – it must have taken an hour and a quarter. He was relaxed and in good form – and very alert.”

Of the actual Schülerkreis, the first which Benedict has missed since its inception, Fr Twomey said it did suffer by his absence. “We did miss the Pope’s own contribution to the discussion. That has been there every other year when he always gave it an extra dimension by asking the right questions and making the right comments, he brought the discussion to another level really. Bringing it forward with more interesting conclusions.”

He added, “He always has something original to say no matter what the subject is and we missed that because he has thought about all these questions thoroughly. But nobody referred to it, we were just aware that things have changed,” he said.

However, there are no plans to wind down the Schülerkreis according to Fr Twomey. “We are already planning next year’s gathering and certainly the younger generation’s Schülerkreis is expanding and that is one of the questions we have to address – what if it gets too big. That is a major question that they are dealing with now.”

In addition to the Schülerkreis, the Ratzinger Foundation also met in Castel Gondolfo. Fr Twomey is a trustee of the Foundation, which raises money and tries to promote the theology of Ratzinger by organising conferences and giving stipends to students of his theology.

Fr Twomey said he and the other trustees met the day before the Schülerkreis began to discuss a major forthcoming project which is being planned for next year.