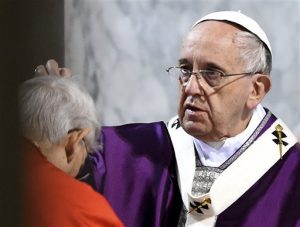 The Lenten journey is an opportunity to return to the Lord “wholeheartedly and in every aspect of our life”, Pope Francis has told the faithful in his annual message for Lent.

Urging members of the Church to take up the Lenten journey with enthusiasm, sustained by almsgiving, fasting and prayer, he reminded people to participate in this year’s ‘24 Hours for the Lord’ initiative, describing it as a moment of grace which invites the entire Church community to celebrate the Sacrament of Reconciliation in the context of Eucharistic adoration.

In each diocese, at least one church will remain open for 24 consecutive hours, from Friday 9 March to Saturday 10 March, offering an opportunity for both Eucharistic adoration and sacramental confession.

Pope Francis said he hoped his message would help the entire Church experience this time of grace anew, with joy and in truth.

But he also blasted false prophets that appear as “snake charmers” and “manipulate human emotions in order to enslave others and lead them where they would have them go”.

Expressing concern over the many people “mesmerised by momentary pleasures, mistaking them for true happiness” he said many men and women live entranced by the dream of wealth, which only makes them slaves to profit and petty interests!”

“How many go through life believing that they are sufficient unto themselves, and end up entrapped by loneliness,” he highlighted.

Warning that false prophets can be ‘charlatans’ who offer easy and immediate solutions to suffering that soon proves utterly useless, he also expressed concern for the many young people who are taken in by “the panacea of drugs, of disposable relationships, of easy but dishonest gains”.

“How many more are ensnared in a thoroughly ‘virtual’ existence, in which relationships appear quick and straightforward, only to prove meaningless,” the Pope challenged.

Blasting these swindlers for peddling things that have no real value, he said they “rob people of all that is most precious: dignity, freedom and the ability to love. They appeal to our vanity, our trust in appearances, but in the end they only make fools of us.”

In order to confound the human heart, the devil, who is “a liar and the father of lies”, he said, has always presented evil as good, falsehood as truth. “That is why each of us is called to peer into our heart to see if we are falling prey to the lies of these false prophets.”

The Church, as mother and teacher, along with the often bitter medicine of the truth, offers the faithful in the Lenten season the soothing remedy of prayer, almsgiving and fasting.

By devoting more time to prayer, people can enable their hearts to root out their secret lies and forms of self-deception, and then find the consolation God offers. “He is our Father and he wants us to live life well,” he said.

Almsgiving, the Pope said, sets us free from greed and helps us regard our neighbour as a brother or sister.

“I would also hope that, even in our daily encounters with those who beg for our assistance, we would see such requests as coming from God Himself. When we give alms, we share in God’s providential care for each of His children. If through me God helps someone today, will He not tomorrow provide for my own needs? For no one is more generous than God.”

“Fasting weakens our tendency to violence; it disarms us and becomes an important opportunity for growth.  On the one hand, it allows us to experience what the destitute and the starving have to endure. On the other hand, it expresses our own spiritual hunger and thirst for life in God. Fasting wakes us up. It makes us more attentive to God and our neighbour. It revives our desire to obey God, who alone is capable of satisfying our hunger.”

Pope Francis invited men and women of goodwill who are not members of the Church to join forces with the church if they are concerned about the chill that paralyses hearts and actions and the weakening of the human family.