Ploughing2014: Church in the ‘market square’ 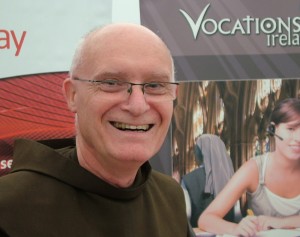 Among the 1,400 exhibits of all things worldly and agricultural at this year’s National Ploughing Championships which drew more than 200,000 people, were stands promoting faith, religious education, mission and vocations.

Brother Pat Lynch, a Franciscan friar, was at the Vocations Ireland stand.

“Thousands of people come here every day so it is great to be here. It’s not so much about getting vocations as being a presence,” he told CatholicIreland.net

He said the response from people has been positive.

“I believe that Franciscans and all religious should be in the market place. I go to shopping centres and I come to events like this. I don’t mind being in churches, but I feel this is where we should be, places like this.”

Vocations Ireland is an umbrella  body for all the religious organisations in Ireland.

Nearby at a Missionary Union stand, Sisters from the Missionary Sisters Servants of the Holy Spirit were handing out leaflets with ‘A Farmer’s Prayer’ and brochures about their own work. 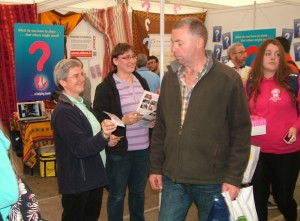 Sr Eva Pliszizak, a young Polish nun, who entered the order aged nineteen, said the public were somewhat surprised to see the missionary sisters there.

“Everyone is expecting that there will be farmers [stalls] or people working in villages, not really missionaries,” she told CatholicIreland.net

Young people talked to them about the bigger issues in life – “who they want to be, what they want to do with their lives. They are kind of searching for a purpose in life,” she said.

And despite the small numbers of religious missionary Sisters, she was hopeful for the future.

“Even the smallest drop, the smallest seed when it is put in the soil, grows, so I believe in that, even if we are a small number of representatives, we can always [effect] change.”

In the Diocese of Kildare and Loughlin tent, the novelty this year was small packets of blessed salt which were distributed to the public.

“We’re inviting the farmers to take it home, place it on their land, use it perhaps with sick animals or whichever way they want.  And it’s about a blessing and a protection on the people that they care for and the land that they love,” Maeve Mahon told CatholicIreland.net

The blessed salt proved to be popular among farmers.

“I’ll sprinkle some of it on the land, on different parts of the fields, there in the next few days,” said farmer David O’Connor who has a 200 acre farm in Kilkenny.

He told CatholicIreland.net that 2014 had been a good year, and he hoped the blessed salt would help in the year ahead. “We’ll say a few prayers and hope for the best anyway.” 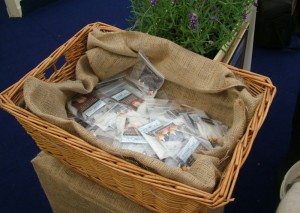 Reviving an old tradition: blessed salt for the land.

The Kildare and Leighlin tent also had a prayer space where people could pray quietly.

Fr John Cummins, Administrator at Carlow Cathedral, said people were glad to see a ‘church’ presence at the ploughing.

“Some of them are just stunned actually to see us here,” he said.

Other religious groups exhibiting at the Ploughing Championships this week were the Carmelite Monastery, the Jesuits, Sisters of St Joseph of Cluny,  Legion of Mary.

The Church of Ireland diocese of Ferns and Ossary, the  Free Presbyterian church, Our Lady of Fatima rosary group and a Medjugorge group were also present.