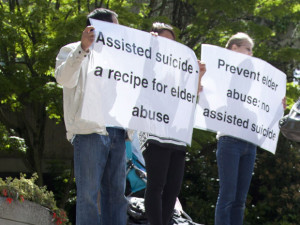 On Wednesday, the court rejected an appeal by the families of the late Tony Nicklinson and Paul Lamb by a majority of seven judges to two.

They were calling for parts of the 1961 Suicide Act to be declared incompatible with human rights law.

The Suicide Act makes it an offence to encourage or assist a suicide or a suicide attempt in England and Wales. Anyone doing so could face up to 14 years in prison.

However, two of the judges said that the existing ban on assisted suicide was incompatible with human rights, and the president of the Supreme Court said the appeal was rejected to “accord Parliament the opportunity” to change the law.

Responding to the judgment handed down in Nicklinson v Ministry of Justice, Cora Sherlock, Deputy Chairperson of the Pro Life Campaign said, “A true vision of human rights is one that reassures vulnerable groups within our society that we oppose assisted suicide and euthanasia and cherish the dignity and worth of every human life.”

She added, “While the facts of this case and other cases of people suffering with terminal illnesses are very tragic and deserve our sympathy and support, the reality is that if we accept that people can end their lives, there is a real danger that this will have the effect of causing distress to the elderly and most vulnerable members of our society.”

A majority of the judges said that the question they were being asked involved moral judgements rather than points of law and that this matter was therefore one that had to be addressed by parliament.

Cora Sherlock called for more government resources and supports for patients and their families in difficult situations of terminal illness.

“Our challenge is to create an environment where people die with dignity with every possible comfort and the support of their families and community. As a society, we must ensure that everyone is accorded the respect due to them as members of the human family,” she said.

Commenting on the ruling, Andrea Williams of Christian Concern said, “This is good news for the many vulnerable people who would have been at risk if the attempt to weaken the law on euthanasia and assisted suicide had been allowed by the Supreme Court.”

A separate challenge which requested the Court to expand legal protection for those who assist a family member to travel abroad to die was rejected unanimously.

Lord Falconer’s bill will receive its second reading on 18 July.