Nuncio warns of scourge of alcoholism

Speaking in Knock to CatholicIreland.net after celebrating Mass for the 60th annual pilgrimage of the Pioneer Total Abstinence Association to the national shrine, Archbishop Charles Brown said, “We need to do everything we possibly can to help those people who are afflicted by alcoholism and drug abuse.”

He added, “I have complete respect and great regard for the many people who are collaborating in many different ways to help the victims of alcoholism and drug abuse.”

Asked about concerns over the level of binge-drinking among young people in Ireland, the Nuncio warned that binge-drinking “can be in many cases very very dangerous.”

He urged young people intent on drinking to “learn to drink responsibly at home, preferably with your parents and don’t binge-drink.”

Jesuit, Fr Barney McGuckian, who is spiritual director to the PTAA, told CatholicIreland.net that when he started promoting the Pioneers in 1972, “our big concern was teenage drinking. Fifteen years later in the mid 80s I discovered we weren’t talking about teenage drinking, it was teenage drunkenness… that came as a shock to me.”

Shortly after that, he recalled that drugs became a big issues as well. He said it was all about getting the buzz.

“Young people were drinking to get drunk. Even old drunkards in the past didn’t drink to get drunk, they got drunk by accident – they didn’t set out to get drunk.” 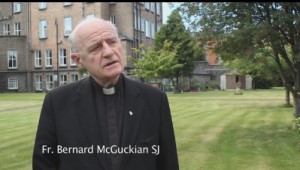 Speaking about the gathering in Knock on Sunday, Fr McGuckian said he was very pleased that they could still fill the basilica in Knock for their annual pilgrimage.

“We’re getting emails from all over the world asking where this charism came from – an Irish charism that helps so many thousands of Irish families,” the Jesuit priest said.

He added, “Our job in Ireland is to make sure that it doesn’t just go to other countries – we need it for our young at the moment.”

The life-long Pioneer member, and promoter of its charism, warned that one of the dangers in Ireland is that alcohol is seen as just another grocery.

“It is not another grocery; it is something completely different and we have got to challenge that day in and day out.”

He said supermarkets had to ensure that if they were selling alcohol that it was kept completely separately from the ordinary groceries “because it is not a grocery”.

In his homily, the Papal Nuncio said one of the most beautiful aspects of the Pioneer spirituality is its focus on the heart of Christ – the wounded pierced heart of Jesus – the sacred heart of Jesus.

Referring to Pope Francis’ call for “aggressive tenderness”, Archbishop Brown said there was “no better image” than the sacred heart which is so central to the Pioneers.

Commending the Pioneers for their emphasis on sobriety and abstinence, he said this was “very important in our world today especially here in Ireland at this moment when countless lives are wounded and in some cases destroyed by drink and by drugs.”

He lamented how “again and again you read in the papers the lists of names of people whose lives are lost to the scourge of alcoholism and drugs.”

He said the great message that the Pioneer Association gives us is that it is possible to live free from that addiction and that sobriety and abstinence are a good thing.”