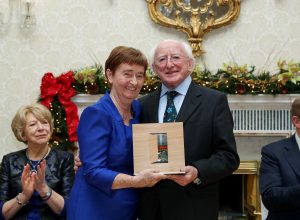 An Irish Sister of St Joseph of Cluny who has pioneered care of children with special needs in Sierra Leone was presented with a Presidential Distinguished Service Award by President Michael D. Higgins last week.

Sr Mary Sweeney SJC hails from Dungloe and flew into Ireland to receive the honour at Áras an Uachtaráin.

Speaking afterwards Sr Mary said the award recognised the many people who have supported her missionary work in Sierra Leone over the past 44 years.

“Especially the people of Sierra Leone whose dedication greatly helps hearing impaired children. These people have helped me in every way through their financial and spiritual support. They have given me encouragement to continue my faith-inspired work through many trials, including the civil war and Ebola, to support those on the margins of society.”

The Irish missionary has worked tirelessly for over forty years, often with limited support, in the extremely challenging environment of Sierra Leone.

By establishing St Joseph’s School for the Hearing Impaired in Makeni, she has given education, skills training and life opportunities to the most vulnerable of people – children with a disability in a developing country.

She remained in Makeni to keep the school open during the brutal civil war in the 1990s, and more recently she played a significant role in coordinating much-needed support for the Ebola response in Makeni.

Sr Sweeney has in recent years widened her focus and her energies on promoting the development of a curriculum for the training of teachers for special needs education in Sierra Leone.

Speaking to CatholicIreland.net, Matt Moran, former chairperson of Misean Cara and author of the recently published The Legacy of Irish Missionaries Lives On, described Sr Sweeney’s work as “typical of the pioneering development that missionaries have undertaken in the global south”.

“Children with special needs there were treated very much as second-class citizens and indeed often abandoned by parents who couldn’t care for them. Services to deal with their needs were non-existent.”

He explained that the Sisters of St Joseph of Cluny were pioneers in providing a special school for the hearing impaired in Makeni. 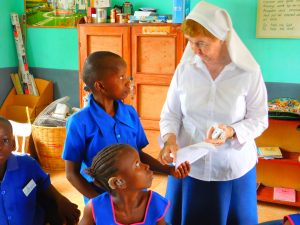 Sr Mary Sweeney with some children at St Joseph’s school.

Sr Mary said she was “grateful and full of joy to receive this award not for myself, but on behalf of the Sisters of St Joseph of Cluny who have served Sierra Leone for over 150 years, as well as the communities who have welcomed and supported them and other missionaries for so many years.”

“In particular,” she said, “I thank the people of Donegal and the Friends of St Joseph’s, whose on-going dedication enabled me to create school facilities that allow these marginalised children to get an education and take their role within their communities. Education is key to ending the cycle of poverty and deprivation in poor countries like Sierra Leone.”

St Joseph’s School for the Hearing Impaired in Makeni was set up by Sr Mary and the Cluny Sisters in 1979 in response to the great need for suitable provision for children with disabilities in northern Sierra Leone.

The school supports over 200 hearing impaired children, and has dormitory accommodation for those from long distances away.

It provides education, skills training and opportunities to children with a disability who have been excluded from education, and often from society as a whole.

Over the years the school has worked to dispel the deep-seated belief that children with disabilities are incapable of being educated.

The school costs over €100,000 a year to run and Sr Mary has opened new revenue streams including a guest house, a farm and a carpentry and tailoring business where some of the school graduates work and learn, providing essential employment and livelihood training.

She aims to make it partially self-sufficient by growing some of their own food, including pineapples, oranges, mangoes, papayas, and yams. Hens are reared and eggs are supplied daily to two supermarkets in Makeni.

“Missionaries work alongside communities, empowering them and helping them to advocate and lobby for their basic rights. It is long-term work but it gives great satisfaction to see impoverished and disadvantaged people taking control of their own lives,” Sr Mary commented.

Currently, there are 1,100 Irish missionaries working in developing countries where the Irish are being succeeded by local and indigenous priests and nuns.

Matt Moran’s book – The Legacy of Irish Missionaries Lives On – outlines the huge contribution many thousands of Irish missionaries made in developing countries and how their legacy is being carried forward by local missionaries there.

Aside from support from her family, Sr Mary is also supported by The Friends of St Joseph’s School for the Hearing Impaired, a registered UK charity based in Essex and run by volunteer trustees.

Anyone wishing to support the school and Sr Mary’s work can donate through the Virgin Money Giving page: www.virginmoneygiving.com\charities\FriendsofStJosephs.

Further information about the support work of the charity: http://www.friendsofstjosephskids.org/.