Thousands of people are due to gather in Belfast today for the 10th annual All-Ireland Rally for Life.

Billed as one of the largest events on the pro life calendar in Ireland, people will gather at 2pm at the Custom House Square, Belfast.

They will then walk “in solidarity” along the streets of Belfast city centre sending out “a clear message to our politicians and the media that the people of Ireland, both north and south, oppose any proposals to introduce abortion and demand protection of unborn children with disabilities,” according to the director of Precious Life, Bernadette Smyth.

She said there was mounting pressure on Stormont and the Dáil to “legalise abortion of unborn babies with disabilities. Those pushing to legalise abortion in Ireland try to deny that an unborn child is a ‘person’.”

The theme of this year’s rally is ‘personhood begins at conception’.

“Every person, with or without a disability, has value and deserves to be protected. Our pro-life laws, both north and south, recognise the personhood of the unborn child and the people of Ireland don’t want that to change,” said Ms Smyth.

The rally comes just days after a Dáil debate seeking to amend the Republic’s ‘Protection of Life during Pregnancy Act’ to allow for abortion in the case of so called ‘fatal foetal abnormality’.

The private member’s bill brought by Independent deputy Mick Wallace who is part of the Independents4change grouping in the Dáil, has been opposed by the Government on the grounds that it is unconstitutional as it breaches the Eighth amendment.

But opposing the motion on Thursday, Minister for Health Simon Harris said that he was not opposed to the purpose of the bill. 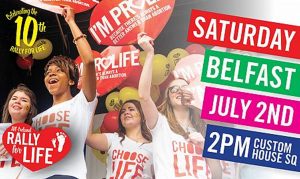 Fine Gael Deputy Kate O’Connell spoke movingly of how during a 20-week scan, she and her husband were told their baby had a profound defect.

“Against all the odds the pregnancy continued to term and I was delivered of a child that had almost the entirety of his organs outside his body,” she said.

“He is now miraculously a fit and healthy five year old with the flare for social comment.”

Ms O’Connell said she supported the repeal of the 8th Amendment but the proposed bill “risked muddying the water”.

During the debate, Deputy Clare Daly told the house that the Master of the Rotunda said there were 71 cases of fatal foetal abnormality diagnosed, with 41 of those affected deciding to travel to the United Kingdom.

Speaking in advance of the debate on Thursday, Cliona Johnson from the parent support group, One Day More, said her group’s members were being “completely ignored” by politicians who support abortion for babies with terminal conditions and that many had been put under pressure to opt for abortion.

“As parents who have received the devastating news that our babies had a life-limiting condition, we have a real contribution to make to the debate. But our experience is being completely ignored,” she said.

“Many of our members say that they received little or no support when they were given their diagnosis.”

“In some cases, they were put under incredible pressure to opt for abortion. The politicians who will stand up in the Dail today and push for abortion to be introduced have never shown any interest in listening to our stories. They will not represent us today.”

Ms Johnson said it was very distressing to hear politicians and campaigners insist that “our children were not entitled to the same protection under Irish law as healthy babies. We don’t hear these politicians calling for a high standard of perinatal palliative care to be put in place in Ireland.”

“It is badly needed and proven to be the best possible support for parents of babies with serious illnesses. Instead, all we hear about is the need to introduce abortion.”

Among the speakers  at today’s rally in Belfast is Fionnuala McArdle whose baby girl, Meabh, was born at just 23 weeks’ gestation, which is within the legal limit for an abortion in Britain under the Abortion Act 1967.

Doctors gave her baby girl a 1% chance of survival. She weighed just 1lb when she was born and is now thriving at nearly nine months’ old.