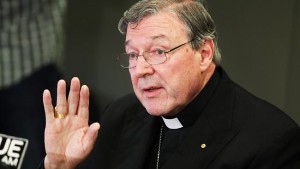 Senior cardinals and bishops are taking firmly opposed positions on the question of barring remarried divorcees from receiving Communion, which is set to be a contentious topic at next month’s Synod on the Family at the Vatican.

Cardinal George Pell, a former archbishop of Sydney and a member of Pope Francis’ advisory body of nine cardinals, said that to admit divorced and remarried people to Communion would be “impossible” and make pastoral practice incompatible with doctrine.

A further five cardinals, who include Gerhard Müller, head of the Congregation for the Doctrine of the Faith, have jointly authored a book that defends the Church’s current position, arguing that it is the most merciful approach to the issue.

Cardinal Pell was writing the foreword to a book by Professor Stephan Kampowski and Fr Juan Perez-Soba, titled ‘The Gospel of the Family’, which is due out next month from Ignatius Press just before the start of the synod.

Both the cardinals’ book ‘Remaining in the Truth of Christ: Marriage and Communion in the Catholic Church’ and Pell’s foreword attack a proposal made in February by Cardinal Walter Kasper, a theologian respected by Pope Francis, that the Church could find a “toleration” of civil marriages following divorce, in some circumstances.

“The sooner the wounded, the lukewarm, and the outsiders realise that substantial doctrinal and pastoral changes are impossible, the more the hostile disappointment (which must follow the reassertion of doctrine) will be anticipated and dissipated,” Cardinal Pell writes.

He said that focusing on the question of Communion for the divorced and civilly remarried, was a “counterproductive and futile search for short-term consolations.”

The five cardinals behind the new book, published by Ignatius Press, are Gerhard Müller, Raymond Burke, prefect of the Supreme Tribunal of the Apostolic Signatura, Walter Brandmüller, president emeritus of the Pontifical Committee of Historical Sciences, Carlo Caffarra, archbishop of Bologna and one of the closest theologians to St John Paul II family life, and Velasio De Paolis, president emeritus of the Prefecture for Economic Affairs of the Holy See.

But in Kasper’s and Müller’s native Germany, the president of the bishops’ conference, Cardinal Reinhard Marx, told journalists the majority of German bishops favoured Kasper’s proposal.

And in the US, one bishop said that the Church’s ban on remarried divorcees receiving the bread and wine was “unacceptable” and called for changes to be made to the process by which Catholics were granted an annulment.

Meanwhile, in the US, Bishop Thomas Tobin of Providence, Rhode Island, said he had agonised over the issue and concluded that the Church should consider simplifying the process by which it annulled failed marriages, thus permitting a second marriage to recognised by the Church.

He said the process, “which some participants have found intimidating”, could be handled at the local level with the oversight of the diocesan bishop rather than from Rome.

He also recommended cutting out the “detailed personal interviews, hefty fees, testimony from witnesses, psychological exams, and automatic appeals to other tribunals”.

Instead, he proposed relying more on the “conscientious personal judgment of spouses” about the history of their marriage and their worthiness to receive Communion.

Earlier this month the Bishop of Portsmouth, Philip Egan, said Catholics should not expect the synod to bring about “abrupt change” or “radical departures from traditional doctrine and discipline”.

In an interview with this week’s Tablet, Cardinal Kasper responds to those who who have criticised his proposals and re-iterates his call for the Church to allow communion for remarried divorcees in some circumstances.