Home > News > Those who gave their lives for Irish freedom recalled 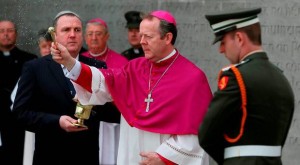 Archbishop Eamon Martin of Armagh blesses the graves of those executed in the aftermath of the 1916 Rising at Arbour Hill.

Commemoration is not just about celebration and looking back, Archbishop Diarmuid Martin of Dublin said on Sunday at the State Commemoration of the 1916 Rising in Arbour Hill.

The congregation at Mass in the Church of the Sacred Heart in Arbour Hill included President Michael D Higgins, the Taoiseach Enda Kenny, members of the government and state officials as well as relatives of those executed in the aftermath of the Rising.

In his homily, the Archbishop reminded the congregation that as Irish men and Irish women “we are called still today never to betray the ideals which inspired these who took part in the 1916 Rising or to let those ideals be betrayed or watered down through our cynicism or mediocrity”.

He said, “We celebrate the 1916 Rising by the way we live as individuals and as a society.”

“We commemorate the 1916 Rising, as each new generation springs up, with a promise and a commitment to put in place in differing and changing times those ideals expressed in the Proclamation.”

Their reason for being there at the State Commemoration was to pray for those who gave their lives for the cause of Irish freedom.

“We remember them for their nobility and their courage. But we remember them also as men and women of human emotion and sensitivity, poets and writers, dreamers and idealists, but also simply as individual unique talented human beings.”

Archbishop Martin said he was especially struck in these days of commemoration by reading the notes taken in 1916 by Fr Columbus Murphy, a Capuchin priest, who received permission to meet Padraig Pearse while he was in detention in Arbour Hill jail.

“General Maxwell handed him the papers needed for the visit but with no sense of magnanimousness or generosity saying to the priest: ‘Oh but we will make those beggars pay for it’.”

Noting that Fr Columbus was probably the first outside visitor that Pearse had had, the priest recalled that “[Pearse] was seated with his head bowed down, sunk deep into his arms resting on a little table…   Disturbed by the noise of my entry he slowly raised his head… Then recognising the [religious] habit in which I was garbed he got up, stretching out his hand and said ‘Oh Father, the loss of life, the destruction, but please God it will not be in vain’.”

The Archbishop of Dublin said that what struck him was not just the human anguish of Pearse but that plea: ‘Please God it will not be in vain’.

“That was not just an expression of deep personal anguish. It was a question and a challenge addressed to us, to each succeeding generation of Irish men and Irish women: ‘Do not allow what we did and what we suffered ever to be in vain’.”

He added, “As Irish men and Irish women we are called still today never to betray the ideals which inspired these who took part in the 1916 Rising or to let those ideals be betrayed or watered down through our  cynicism or mediocrity.”

Describing 1916 as a commitment to Irish Independence, Archbishop Martin said it was “a commitment to independence from, but it must with each new generation be reinterpreted into independence for, a determination every day to use our hard fought political freedom to realise the fundamental purpose and dream of these who gave their lives for a vision of the future which we are all called to cherish.”

We measure our commitment and commemoration not by simply attending ceremonies and festivities but by ourselves fostering our freedom to challenge and especially to shine light on the darker dimensions that emerge and grow in any society: the darkness of poverty and exclusion, of hatred and violence, of self-centeredness and apathy.

We measure our commitment by the way we contribute to a sense of national purpose and national working together.

We measure our commitment by thinking beyond our own borders and here we remember today those members of the Irish Defence Forces who will be celebrating this day of Irish freedom in the service of the peace of others.

We measure our commitment not from the comfort of our own security or with comment from the safety of the sidelines.

The anguish of Pearse after the disappointment of the Rising was not anguish about his own predicament: it was anguish that good would be attained.

During the Mass, which Archbishop Eamon Martin was the main celebrant, a chalice and the paten used at the wedding in Kilmainham jail between Joseph Mary Plunkett and Grace Gifford, just seven hours prior to Plunkett’s execution, were used.

A ciborium belonging to the Parish of James’ Street which was used in Kilmainham Jail to bring Holy Communion to those who were executed, in the days leading up to their final hour, including James Connolly when he had made his final peace with God, was also incorporated into Sunday’s ceremony.

In his homily, Archbishop Diarmuid Martin said the chalice and ciborium witness to the deep faith of those executed in the 1916 Rising.

“They drew from their faith a courage which enabled them to see – and to teach us – that when we place our trust in the God who opens a future of love, then our attempts to mirror that God will never be in vain.”

At the start of the ceremony which was attended by other Christian representatives and a member of the Islamic faith, Archbishop Eamon Martin said the 1916 commemorations have drawn us to reflect on what it is to remember.

“We’ve discovered that our remembering is not just about looking back to a time long ago and piecing together the story of what happened from old documents, photographs and testimony.”

“Remembering speaks also to our present; the way we remember says a lot about who we are today, our sense of identity, what is important to us now also shapes our future, because it helps us discern the kind of people, society and nation that we want to hand on to our children and grandchildren.”

He added, “Respectful remembering holds the past, present and future delicately together in trust, faith and hope.”