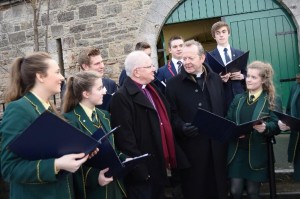 The Primate of All Ireland, Archbishop Eamon Martin, has said the Churches in Northern Ireland are praying that there will be continued developments with regard to peace.

Speaking on Wednesday in Armagh, the Archbishop said “Our politicians are meeting yet again to try to find agreement on some of the remaining fractious issues like the past, parades and flags.”

Recalling an advent service in the city last week attended by representatives of all the Christian traditions, he said sent out a message of peace and good will to all people.

He was speaking as students from the Protestant Royal School and St Catherine’s which is Catholic, held an ecumenical carol concert for the Catholic Primate and the Church of Ireland Primate, Archbishop Richard Clarke.

“I think a wonderful occasion like this morning where you have children from across the community coming together, smiling together and singing together is a great witness to hope,” Dr Martin said.

Saying he was “very grateful” that the Churches have “a very positive relationship” in Armagh, he said all over the island of Ireland, and particularly in Northern Ireland, there was evidence of more cross community events and activities taking place.

Speaking about his shock over the Pakistani school massacre, Archbishop Clarke said the tragedy was a reminder “that what we have here is not something that we can ever take for granted”.

Admitting that he had been shocked by the killing of 132 children and nine staff at a school in Peshawar, he commented “The notion of children being the symbol of one’s hatred just seems unbelievable.”

He underlined that Christmas was about celebrating that God came in the vulnerability and innocence of a child.

The two religious leaders recorded their Christmas Day message for RTE television on Wednesday before visiting blood donors at Carrickmore in Armagh.