Home > Featured > The path of Christian faith is still alive in Ireland: Nuncio

The path of Christian faith is still alive in Ireland: Nuncio 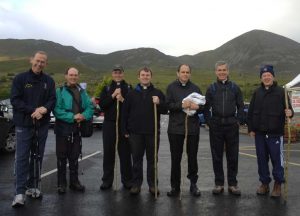 The path of Christian faith is still alive in Ireland in 2016, Pope Francis’ representative in Ireland said on the eve of Reek Sunday.

In his homily at Mass in St Mary’s church in Westport on Saturday evening, Archbishop Charles Brown told the congregation that at times we are all tempted to be downcast, to keep our eyes down and our heads down.

“Even physically, many of us, and I include myself in this, have our heads literally down as we read our smart phones and type and text.”

But the Nuncio added that Jesus Christ is saying to each of us today –  “sursum corda” – “hearts up!”

The Nuncio, who will climb Croagh Patrick this morning, noted that from the dawn of history, human beings have been fascinated by mountains.

“There is something intangibly mystical, attractive and enchanting about the high places, something profoundly renewing about just being in the mountains.”

Referring to the American naturalist, John Muir, the father of the American National Park system, the Archbishop said that he had famously given advice to his contemporaries about finding peace.

“Climb the mountains” he wrote, “and get their good tidings. Nature’s peace will flow into you as sunshine flows into trees. The winds will blow their freshness into you, and the storms their energy, while cares will drop off like autumn leaves.”

These, Dr Brown said, were some of the reasons why, for Christians, climbing mountains is so rich in significance.

“The physical ascent of a mountain is a concrete image of Christian life,” he stated.

He also recalled that it was between 31 July – 1 August 1890 that a young priest, who would be elected Pope Pius XI some thirty-two years later in 1922, pioneered what is now the normal route to the summit of Mont Blanc from the Italian side.

“Father Achille Ratti was a renowned mountaineer who became a heroic Pope,” he said.

“Our own beloved Holy Father, Pope Francis, while he might not be the accomplished mountaineer that Pius XI was, still shows his love for the mountains in writing about their beauty and grandeur in his recent Encyclical Letter Laudato Sì. He writes “Standing awestruck before a mountain… [a person]… cannot separate this experience from God, and perceives that the interior awe being lived has to be entrusted to the Lord.”

Noting how Croagh Patrick is a mountain which has been a place of pilgrimage for Christians in Ireland for well over a thousand years, he marvelled at the profound and richly significant the Reek climb today was.

“We literally follow the paths traced by our ancestors, women and men of faith, who kept that faith despite the opposition they faced, despite poverty and discrimination and emigration and famine.”

The Papal Nuncio continued, “On Croagh Patrick, we literally walk in their footsteps and we follow their trail. Brothers and sisters, let us follow them not only physically, but spiritually as well, by treasuring our Catholic faith even when we face opposition.”

He said the pilgrimage to the summit of Croagh Patrick was an experience of community.

“Tomorrow, we climb together, at the same time as others, as we do in the Christian life.  We help one another; we watch out for one another; we make way for others on the trail.”

7am: Archbishop Neary and Archbishop Brown will begin the pilgrimage ascent from the car park at the mountain base in Murrisk.

9.30am: Archbishop Brown will celebrate Mass on the Summit

10am: Fr Fintan Monahan will celebrate Mass in the Irish language on the summit

10.30am: Archbishop Michael Neary will celebrate Mass on the summit.