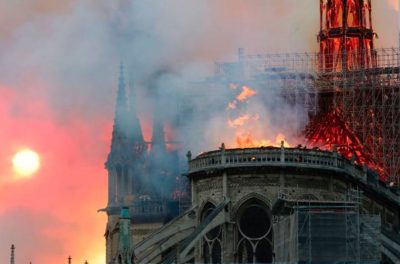 As French firefighters battled to bring the blaze at Notre Dame Cathedral under control on Monday evening, some Parisians took to the streets and sang the ‘Hail Mary’ in French, mourning the destruction of one of the most iconic Christian places of worship in the world and finest examples of Gothic architecture.

Firefighters told Agence France-Presse that the fire was “potentially linked” to renovation work in the building.

A spokesperson for Notre Dame Cathedral, André Finot, expressed concern to Le Monde newspaper that the fire’s destruction will be beyond repair.

“Everything is burning. The framework, which dates from the 19th century on one side and the 13th century on the other, there will be nothing left.”

Fire tore through the cathedral’s roof and toppled the spire. Hundreds of firefighters spent Monday evening trying to halt the spread of the blaze and to save as much as the building as possible. The cathedral attracts up to 12 million pilgrims and visitors a year.

The people of Paris were stunned to see clouds of smoke billowing across the city as they headed home from work and many stood and watched in tears as the catastrophic damage unfolded.

The cathedral’s astounding rose windows over its three main portals may not have survived the blaze.

It remains unclear what state the iconic twin bell towers, which were first constructed in the 13th century, are in. They were the tallest structures in Paris until the completion of the Eiffel Tower in the late 19th century.

It is also unclear if the great organ, which dates from 1401 and is the largest in France, has survived.

The cathedral’s treasury contains several sacred artefacts including what is believed to be the Crown of Thorns, a fragment of the True Cross and one of the Holy Nails.

In a tweet President Emmanuel Macron said, “Our Lady of Paris in flames. It is emotional for a whole nation. Thoughts for all Catholics and for all French. Like all our countrymen, I’m sad tonight to see this part of us burn.”

In Ireland President Michael D. Higgins expressed the “solidarity of the Irish people with the people of France at the catastrophic damage to one of the most iconic buildings in Europe – a building which the people of Paris have shared with millions from all over the world, as part of a shared global cultural heritage.”

The President said that Notre Dame had suffered many instances of catastrophic damage over the centuries, and he hoped that it would survive “this latest terrible catastrophe”.

In Dublin, Archbishop Michael Jackson said the people in the United Dioceses of Dublin & Glendalough were “devastated to witness the fire that ripped through the upper stories of Notre Dame de Paris”.

Describing the medieval cathedral as synonymous with Paris and beloved of Parisians, he noted that it attracts millions of tourists and pilgrims annually and inspires them through its graceful architectural lines and its countless works of art that are built into its spiritual fabric.

“The aesthetic and the spiritual combine in ways that enable the human soul to transcend the everyday and to sense something of the presence and power of God.

“Our thoughts and prayers are with all associated with the daily life of the cathedral as they will have been in the early stages of Holy Week liturgy and worship. While the cathedral’s destruction looks to all like desolation, we hope that a full restoration will be possible. Notre Dame has withstood many vicissitudes throughout its history. We are confident it has the energy to rise again,” Dr Jackson said.

Former US president Barak Obama tweeted, “Notre Dame is one of the world’s great treasures, and we’re thinking of the people of France in your time of grief. It’s in our nature to mourn when we see history lost – but it’s also in our nature to rebuild for tomorrow, as strong as we can.”