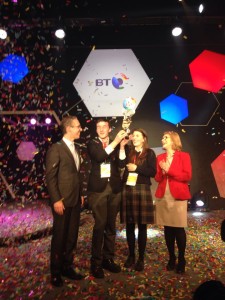 Parents’ attitude and their drinking habits do influence whether or not their children engage in excessive and hazardous drinking.

This is one of the findings of the project which won the 51st BT Young Scientist & Technology Exhibition.

Speaking to Independent.ie, Ian O’Sullivan said they came up with the topic while watching their friends on nights out. They noticed the differences in drinking habits.

“We thought there must be different reasons, one of which was parents, so we decided to research that,” he said.

He and Eimear Murphy entered in the Intermediate section of the Social & Behavioural Sciences category.

They surveyed 902 fifth and sixth year students in practically every second level school in the Kanturk-Mallow area.

Uniquely for this type of survey, the parents of 360 of these students also agreed to report on their own drinking and attitudes, and they answered questions which would indicate their sense of well being.

Answers to questions about drinking habits of both parents and students were confidential to each party but the final data for each was compared.

“What it highlighted really was the particular role of the dad in the household; if he was lenient towards alcohol consumption then statistically this seemed to have had an effect on the child’s drinking habits.”

“The mother had a protective role alright, but the father seemed to have a more significant role,” Derry O’Donovan, the student’s science teacher, told CatholicIreland.net.

The students were advised by Dr Anne Hope of Trinity College to study parents’ wellbeing as part of the survey.

Data gathered under this heading revealed that if the father had a good sense of wellbeing (if he felt good about himself) then the children were less likely to be hazardous drinkers.

If the father did not have a good sense of wellbeing then the children were more likely to be hazardous drinkers.

On the mother’s role, they found that if mothers disapprove of their teenagers drinking, this can halve their risk of hazardous drinking.

Currently the two young winners are in a whirlwind of media interviews and excitement, but they have still to go forward to represent Ireland in the European Science Show in the summer.

There has been huge interest in the study and they hope to have it published in a top medical journal.

Once all that is done, they would love to present it to the Irish Government so it can influence public policy.

Many significant UK, European and American and conferences also want to present their research. Universities have also expressed interest.

At the ceremony to announce the winners, Professor Ian Robertson said: “The message from this research can help shape family alcohol behaviour in a very positive way into the future.” 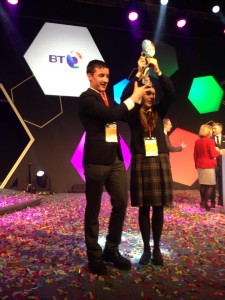 Approximately 1,200 students from across the island of Ireland covering 550 projects from 206 schools competed for the title ‘Winners of the 2015 BT Young Scientist & Technology Exhibition’.

The award for runner-up group went to transition year students Patrick Sweeney (aged 16), Chloe Daniels (aged 16) and Annette Moran (aged 15) from Carrick-on-Shannon Community School, Co Leitrim for their project Birdsong and music: Connections between African and Irish music and developments of a new music genre based on the Galapagos Island’s birdsong.

The award for individual runner-up went to transition year student Jack O’Sullivan (aged 16) from Kilkenny College for his project SmartphonePC.

This is the first time that students from Colaiste Treasa, Kanturk, Co Cork won the award. Everyone at the ETB school (formerly VEC) is delighted at the win.