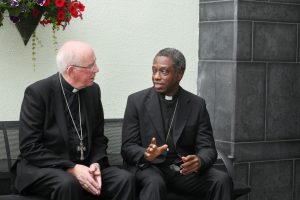 According to the Irish Catholic, Archbishop Jude Thaddeus Okolo, Papal Nuncio to Ireland, has said that “the process of amalgamation has already started” in streamlining and merging the 26 dioceses of Ireland.

After the 2010–2012 Vatican investigation of the Catholic Church in Ireland, it became clear that many people wanted a reduction in the number of dioceses in Ireland — from 26 to as few as 12. Reasons cited for the popularity of this proposed reduction, according to the Irish Catholic, include streamlined bureaucracy and “a leaner structure that would make the Church more fit for mission in an increasingly secularised Ireland”.

Some senior bishops are supposedly averse to the change.

Regarding the process of amalgamating dioceses, Archbishop Okolo said to the Irish Catholic: “It will be slow and steady – to avoid hurts, shocks, and surprises. Everyone implicated in the matter will be involved. The people will effect the amalgamation, work out the details of the cohesion, and inform the Holy See …

“The amalgamation begins from the grassroots. The communities, the meetings. In all the dioceses today, there are consultations going on … some don’t want to hear it.”