Remember Blessing on him who comes in the name of the Lord  (Mark 11:9)

We adore you O Christ and we praise you.
Because by your Holy Cross you have redeemed the world.

The First: from Bethany into Jerusalem on the Sunday and Jesus being acclaimed as a political saviour.
People hoped he would triumph,
that his followers would put him into power
and all hoped he would get rid of the Romans.

The Second, from Jerusalem to Calvary outside the walls of the city on the following Friday,
now a man in disgrace.
A man carrying his cross,
crowned with thorns,
mocked and bullied and tortured.
And about to be killed.
Like a parade to a dishonoured graveside.

Jesus had all sorts of followers
– some like camp followers, some terrorists, some people on the make for themselves, or the ones who stayed  till the end, like his mother, an aunt and a few of the followers. –-others were at a distance, they would come back, and would follow later to the end.
We hope to be in that second parade.

Some wave palms. Palms are good for waving in triumph, but soon they wither.
The cross is forever, for all time. The cross is his love, and as we follow in this parade we show our willingness to console him in love to the end.
This is a holy week because a man like us, and one of the Trinity, gave his life for us.

Look at a crucifix 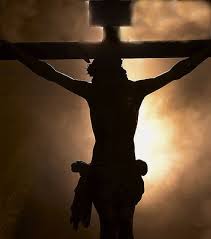 and ask yourself,
‘what am I willing to do for Jesus?’
and
Pray
Lord,
by your cross and resurrection,
you have set us free;
you are the Saviour of the world.
Amen

To the old rugged cross I will ever be true
It’s shame and reproach gladly bear
Then he’ll call me some day to my home far away
Where his glory forever I’ll share
Refrain:
And I’ll cherish…