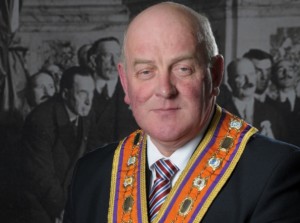 Senior representatives of the Grand Orange Lodge of Ireland met with a delegation of Catholic clergy, including Bishop Noel Treanor of Down and Connor, in Belfast on Tuesday.

It is the second time this year the Loyal Order has met formally with Catholic Church representatives.

They previously held preliminary discussions with a delegation of Catholic representatives along with the Royal Black Institution last February.

Among the attendees at the meeting on Tuesday were the Grand Master of the Grand Orange Lodge of Ireland, Edward Stevenson.

The issues discussed included the Haass proposals, parading, and shared concerns regarding child poverty and educational underachievement in Northern Ireland.

Both parties agreed the two-hour meeting was beneficial in terms of developing mutual respect and understanding for both traditions, and committed themselves to further engagement.