One hundred cribs at Vatican show the true meaning of Christmas

The Pontifical Council for the Promotion of the New Evangelization has opened the traditional “100 Cribs” International Exhibition in the Vatican.

“The crib in addition to being a beautiful cultural tradition which was developed by the genius mind of St Francis of Assisi, and spread throughout the world, is a strong instrument for evangelization. So many persons stop every Christmas before the mystery of God made man, represented with statuettes, which in many cases are authentic masterpieces of art to pray, to reflect and to discover the love of God who becomes a child for us,” said Archbishop Rino Fisichella, president of the Pontifical Council for the Promotion of the New Evangelization.

The exhibition this year is called “100 cribs at the Vatican” and runs from 7 December 2018 to 13 January 2019 at Sala San Pio X in via della Conciliazione, having moved from Piazza del Popolo.

Dr Mariacarla Menaglia, director of the “Rivista delle Nazioni”, which has organized this event for the past 42 years, and who is the daughter of the creator and founder of the exhibition, explained the idea behind it.

“My father, Manlio, founded this exhibition in order to keep alive the nativity scene, a typical Italian tradition, which is an essential part of our religious culture and for us Catholics it must be our engagement to keep it alive over time,” she said.

The exhibition began in 1976 at a time when the traditional Italian crib was at risk of being overshadowed by the Christmas tree, which was not part of the country’s culture. So Manlio Menaglia set up the exhibition to show the crib as a work of art that respected the values of peace and brotherhood signified in the nativity scene.

Another aim was to promote the crib to a wider audience and to other countries through the many tourists who visit the exhibition around Christmas time in Rome and through the mass media. The cribs are specially built each year and come from almost all Italian regions and from around 25 foreign countries. They are made by professional artists and craftspeople as well as amateurs, community groups and schoolchildren. 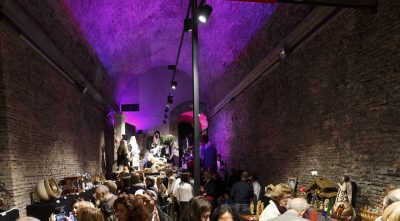 They are made in every style and material possible, ranging from the traditional style carved by master artists centuries ago to the modern using recycled materials such as car engines and televisions. Some are even modelled in bread or chocolate.

The tradition of the crib or nativity began with St Francis of Assisi in 1223 in a cave outside Rome using a live donkey and ox to surround a manger.

Pope Francis spoke of St Francis when he thanked the donors of the Christmas tree and the Nativity scene in St Peter’s Square on 18 December.

He said that “Franciscan sources” say the saint wished in setting up the first crib to “in some sense glimpse with the eyes of the body the hardships in which he lacked what is necessary for a newborn” and that in cribs “we honor simplicity, exalt poverty, praise humility.”

Pope Francis invited all to pause before the Nativity scene, where God’s tenderness speaks.