Sr Anne Falola OLA reports on the efforts of the newly opened Maria Centre in the Nigerian capital Abuja to support those displaced by Boko Haram’s violence. 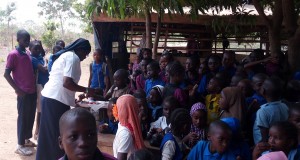 In the past two years, many men, women and children have fled the troubled parts of Northeastern Nigeria to seek safety in other parts of the country, while the war with the Islamic extremists Boko Haram rages on.

In Abuja, many camps for Internally Displaced People (IDP) have sprung up. Most of them are in very poor condition.

Sr Anne Falola, OLA is based in Abuja.

The OLA Sisters have had a presence in Nigeria since 1878 and many Irish members of the OLA have served and continue to serve there.

When she first started working at the camps, Sr Falola says she was immediately struck by the very evident upset among those she found there.

“It is indeed very sad to see the expressionless faces of children and young people who have been exposed to so much violence and have had to flee from their homes and region.” 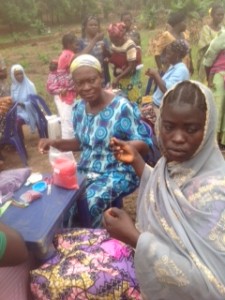 Women of Durumi IDP Camp in Abuja attending the inaugural craft workshop at the Maria Centre.

“Together with other volunteers, we organised make-shift schools and we offered our friendship and basic material assistance to alleviate their pain.”

“While the government is fighting hard to overcome the militants and disarm them, very little attention is paid to the victims who have lost so much and virtually live each day on the charity of others.”

The OLA Sisters along with other volunteers recently inaugurated the Maria Centre.

The aim of the Maria Centre is to accompany the young girls and vulnerable women in these camps.

“We hope that through our activities, the women will find friendship and trust, which would rebuild their self-esteem and confidence. With the help of volunteers and donors, we hope to help the young girls and women to acquire new skills, like sewing, cookery, crafts, etc.”

As the world marked International Women’s Day on 8 March, a craft workshop commenced at the Maria Centre.

According to another OLA nun, Sr Anne: “like every beginning, there was confusion, but God made something beautiful out of our chaos.”

“About 50 people turned up for the first class and I was surprised at how much enthusiasm and expectation was on ground! After the settling down, everything went very well and everyone went home happy with some homework to do and bring back for next class on Thursday.”

It was also observed that both Muslims and Christians attended the workshop, which in Sr Anne’s words, “confirms that our people have no problem living together in peace”. 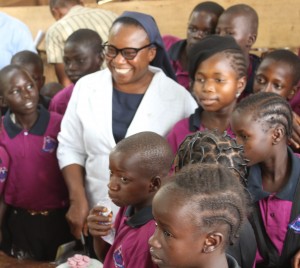 Sr Anne Falola, OLA with children of Durumi IDP Camp in Abuja cutting a cake with marked the opening of the Maria Centre.

As numbers attending the craft workshop are expected to grow, Sr Falola highlighted, “We are looking for sewing machines and leather sewing machines for the shoes and bag-making. We also urgently need containers which can be conditioned and be used as workshops, so that we can lock up our equipment and have adequate shelter when it rains.”

Sr Anne hopes the Maria Centre will give some optimism to those in a very difficult situation.

“We pray that the Maria Centre will bring fresh hope to a very sad situation, where the displaced persons struggle to overcome their trauma and rebuild their lives. Whatever the future holds for these people, we pray that they would be able to smile and our little love and support will help to erase the trauma they have been through.”

The Missionary Sisters of Our Lady of the Apostles (OLA) were founded by Fr Augustin Planque in 1876.

In 1931, Ireland became a province and was given special responsibility for Missions in English speaking Nigeria and Ghana. The Nigerian Province was officially inaugurated in 1990.