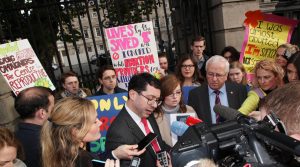 Independent TD Mattie McGrath and Independent Senator Rónán Mullen have accused the Oireachtas Committee on the 8th Amendment of being “a propaganda exercise in favour of abortion”.

In a statement issued on Thursday, the two Oireachtas members said news that witnesses due before the Oireachtas Committee are also actively fundraising to change Ireland’s abortion laws showed “how skewed in favour of abortion the Committee’s work has become”.

They hit out at the fact that the Committee was now hearing from ‘advocacy groups’ as expert witnesses.

The two politicians highlighted how among these ‘expert witnesses’ whose presence at the Committee the taxpayer is funding, is the New York-based abortion-campaigning group, Center for Reproductive Rights, which has been fundraising online in the US in recent weeks to overturn Ireland’s pro-life laws.

“We already had serious concerns about the one-sided nature of the process but this latest revelation takes things to a whole new level,” the Deputy and Senator stated.

They criticised the fact that the multi-million dollar US Center for Reproductive Rights was invited to the Committee but no one representing those saved by the 8th Amendment had been called up.

“It is deeply concerning that an American group can actively fundraise to change the laws of this country and yet get presented as an impartial expert before the Committee. It’s an insult to the Irish people and all those ordinary families from around the country with personal stories who are being shut out of the process.”

They also hit out at the Citizens’ Assembly’s failure to consider the positive and life-saving impact of the 8th Amendment.

“Given the way things have developed, it is our honest view that the credibility of the Committee cannot be restored owing to how entirely slanted the process has become. We are now actively considering whether there’s any point in our remaining on as members.”

They concluded their statement by stating that it’s hard to argue with those who describe this entire process as a propaganda exercise in favour of abortion. 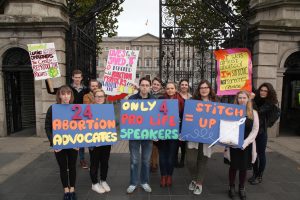 Members of the Pro Life Campaign outside the Dail to raise concerns about the lack of balance on the Oireachtas Committee on the 8th Amendment. Pic John Mc Elroy.

Meanwhile, members of the Pro Life Campaign participated in the gathering outside the Dáil on Thursday to raise concerns about the lack of balance on the Oireachtas Committee on the 8th Amendment.

Speaking at the event, Cora Sherlock of PLC said, “There are at least 24 groups and individuals attending the Committee who are making the case for repeal of the 8th Amendment. In contrast, there are at most four individuals who have been invited to present the case for the pro-life side. This represents an appalling lack of balance and completely destroys the credibility of the process currently underway.”

Ms Sherlock claimed that the international groups invited to come before the Committee represented a ‘Who’s Who’ of the abortion lobby on the world stage.

“It is inexcusable that a group like Centre for Reproductive Rights from New York have been invited as one of these groups.”

“Right from the start of this process, the 8th Amendment has been put on trial and the positive case for all the good it has done has never been aired. The way things have developed means that the process is now irretrievably broken and is no basis on which to bring forward any referendum proposal.”

Also at the gathering was Mary Kenny, a young mother from Limerick. She described herself as “one of many parents who credit the 8th Amendment for my beautiful daughter being alive today”.

“There are thousands of people like me who when faced with an unexpected pregnancy could easily have gone down the road of abortion if there had been an abortion clinic down the road from where I live. I dread to think what might have happened if that had been the case. It upsets me that the 8th Amendment is constantly under attack and all the good it has done is being completely overlooked.”

She said she was disappointed that time was being given at the Oireachtas Committee to powerful international pro-abortion lobby groups while stories like hers were being “entirely shut out of the process”.

“How are the public supposed to make their minds up about such an important issue when this committee are completely overlooking hearing a fair and impartial debate?”

She concluded, “All the talk seems to be about abortion and no time is being allotted to talking about positive alternatives. The Oireachtas is failing people like me and all of the public by continuing in such a one-sided way.”