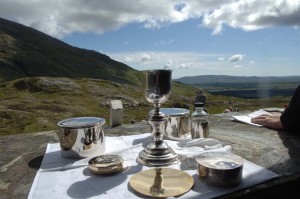 The annual Oilithreacht go Máméan was held last Sunday at the ancient pilgrimage in the Maamturk mountains between the parishes of Leenane and Recess.

The Archdiocese of Tuam’s diocesan secretary, Fr Fintan Monaghan, told CatholicIreland.net that though “the pilgrimage was held in absolutely ideal weather conditions”, the numbers were down on other years “probably due to the fact that Mayo were playing in Croke Park.”

The trek to the pilgrimage site, which is linked to St Patrick, was followed by the traditional Turas na Croise or Stations of the Cross.

Joe John Mac an Iomaire then gave a rendition of ‘Caoineadh na dTrí Muire’ in sean-nós style and this was followed by Mass. All ceremonies were conducted in Irish.

Máméan (which means the pass of the birds) was an ancient pagan site associated with the Lughnasa festivals. It lies thirty miles from Croagh Patrick. Ireland’s Patron Saint is reputed to have visited it during his 5th century travels through Joyce Country, and from Mámean, he gave Connemara his blessing. Máméan afterwards thus became a Christian and a Patrician place of worship.

The site is marked by a holy well, St Patrick’s Bed, a cleft in the rock and a circles of stones representing the Stations of the Cross. Completing the shrine is a Mass Rock – used during the 18th century penal times when Roman Catholicism was outlawed. 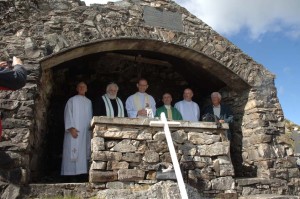 However, at the end of the 19th century the pilgrimage was discontinued due to faction fights and excessive poitín drinking.

In 1980, Jesuit priest Fr Micheál MacGréil revived the tradition of making a pilgrimage to Máméan.

The Chapel, Holy Well and Stations of the Cross were renovated, along with a large statue of St Patrick. Sculptor, Cliodna Cussen depicted St Patrick as a shepherd with a sheep at his feet.

Speaking to CatholicIreland.net, Fr Monaghan said that Fr Michéal Mac Gréil often remarks that “Lough Derg is the most penitential of the pilgrimages, that Croagh Patrick is the most physical, but that Máméan is the most spiritual.”

“I think anyone that attended this year’s pilgrimage would have found that with the beautiful celebration of the Cross and death of Our Lord with Turas na Croise and Joe John Mac An Iomaire singing the haunting lament Caoineadh na dTrí Muire along with the Resurrection in the singing of the Aiseirí,” Fr Monaghan said. 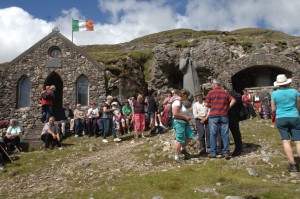 He added that the young musicians from Iorras Aithneach greatly contributed to the celebration of the whole occasion.