Vatican recognition for Association of Exorcists 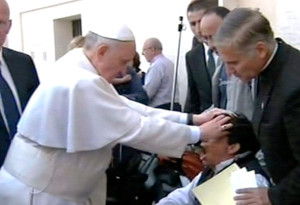 The Vatican’s Congregation for the Clergy has given its backing to the International Association of Exorcists which has 250 priest members specially tasked with liberating those who are possessed.

In 1994, members agreed to hold international meetings every two years, and the global group was born. The Association now has members in 30 countries.

In 1999, the Vatican revised its rules for exorcisms, which were first issued in 1614.

The updated guidelines did not alter the text that priests are to use when performing an exorcism. However, the document warned priests against confusing those who are possessed with the mentally ill.

A priest is allowed to perform an exorcism only with the consent of his bishop and after an examination by doctors and psychologists to determine whether the affliction has a natural origin.

Fr Francesco Bamonte, an exorcist from the Diocese of Rome and a member of the Order of the Servants of the Immaculate Heart of Mary, told L’Osservatore Romano that the Holy See’s approval of the IAE “is cause for joy…for the Church as a whole.”

“Exorcism is another form of charity,” he said. “We hope more priests will realise the existence of this dramatic reality, which is often ignored or underestimated.”

“Exorcism benefits people who are suffering, and is doubtless a work of bodily and spiritual mercy,” he added.

Pope Francis has mentioned Satan on a number of occasions.

Last year he appeared to exorcise a wheelchair-bound man who said he was possessed by the devil.

However, when a video surfaced of the Pope firmly holding his hands on the head of the man in a wheelchair and pressing down, the Vatican denied he had performed an exorcism.