Home > Featured > Nuns’ side of the story must be told

Nuns’ side of the story must be told

Bishop Denis Nulty publicly acknowledges and recognises contribution of Mercy Sisters and religious generally to Irish life and culture, and to life and culture far beyond Irish shores. 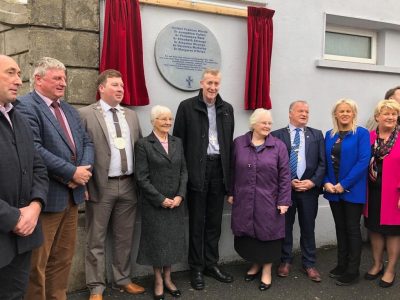 A well-known academic has warned that while the “damage done by a few nuns must be acknowledged and repented” it cannot be allowed become the whole story of women religious in Ireland.

In her letter to the Irish Times (1 November 2018) Sr Una Agnew, a St Louis Sister who is an expert on the poetry of Patrick Kavanagh, described it as a “hopeful sign” that UCD historian Professor Deirdre Rafferty, “with her positive story about women religious, is given prominence in the press” and also that the Jesuit journal Studies has dedicated a full edition to “the nuns’ story”.

She stressed that it was healthy for the reputation of all academic work that a “fuller narration” is requested so that “bias might be challenged”.

According to Sr Agnew, changing “contexts” is essential to research. “One expects this as best practice in the academic world and among reputable journalists,” she said.

She revealed that the training of press secretaries for religious congregations and embracing social media to present a positive public image is considered “abhorrent” by many in religious life.

According to the St Louis Sister, many religious today are witnesses to many different contexts, political, social and religious, that could scarcely be fully understood by modern generations.

“Despite being a remnant of a generation that emigrated in the 1950s and never returned, we who remained are grateful for opportunities we embraced as women religious, to contribute to the life of our country.

“In rural Ireland in the 1940s, the price of a bullock was enough to send a boy of 14 to the Christian Brothers School for a year – a vital investment. Boarding school education for girls was the only suitable option, yet fees stretched family budgets to their limit.

“Similarly, in the 1940s there were few if any ‘little white coffins’ for still-born babies, just shoeboxes lovingly lined.”

She underlined that if history is to be written correctly, it must embrace all narratives and contexts that will allow posterity make a fair assessment of the services religious and their lay colleagues have given to shape the heart and soul of the country.

Referring to Sr Agnew’s letter, Bishop Denis Nulty of Kildare & Leighlin also highlighted the recent issue of Studies and the fact that it features “a number of excellent articles under the caption ‘The Nuns’ Story – writing the record’”.

He was speaking at the unveiling of a commemorative plaque at St Leo’s Convent of Mercy in Carlow.

Dr Nulty said the gathering was about publicly acknowledging and recognising the contribution the Mercy Sisters and religious in general made to Irish life and culture, and to life and culture far beyond Irish shores.

He recalled the link between the Presentation Sisters and the Mercy Sisters which saw the Mercy foundress, Mother Catherine McAuley, enter the Presentation Convent in George’s Hill for a couple of years to study for religious life.

In 1832 Frances Warde was the first Sister professed by Mother Catherine in the very first Mercy Convent in the world – Baggot Street in Dublin.

Tullamore followed a few years later, and then Charleville in Cork, with St Leo’s in Carlow founded in 1837.

Following the death of the second President of Carlow College, Dominican Andrew Fitzgerald in 1843, Bishop Michael O’Connor of the newly established diocese of Pittsburgh, Pennsylvania came to Carlow for the funeral.

While in Carlow, Bishop O’Connor invited the Mercy Sisters to join him on his new mission in Pittsburgh.

Of the 36 members of the St Leo’s Community then, 35 volunteered to travel with him to the new world.

According to Bishop Nulty, it was a very tough journey on the schooner vessel ‘Queen of the West’, lasting four weeks and two days. After they hit land at New York, the group still had a ten-day journey to travel by train and by coach, “a journey in the dark and cold of winter to be a presence of peace and a witness of God’s love”.

“These were very brave women and very brave times. Imagine leaving all that was familiar for a very strange land?” He said they had made a huge contribution to the American church in education and healthcare.

Frances Warde is laid to rest in New Hampshire; Josephine Cullen, Elizabeth and Aloysia Strange, Veronica McDarby, and Philomena Reid were laid to rest in St Xavier’s Cemetery, Pittsburgh, while Agatha O’Brien was buried in Chicago.

“As I leave Bishop’s House every day the first thing I’ll see is this commemorative plaque. May it remind us of those who walked through these gates into an unknown world to be a presence of peace and a witness to God’s love – “Pater, non mea voluntas, sed tua fiat” – Father, not mine, but yours be done,” Bishop Nulty said.