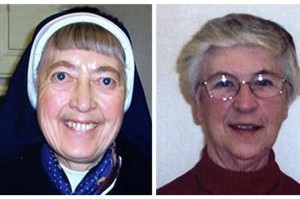 Members of the Irish Bishops Conference prayed on the first day of their autumn meeting in Maynooth for the two elderly nuns killed tragically in a road collision in Co Down on Tuesday morning.

In a statement, Bishop Noel Treanor, in whose diocese the Sisters were living, described the deadly crash as a “sudden and shocking loss of life” which had an impact “not only upon all those who have known the Sisters but upon the wider community in which they served.”

Sr Frances Forde and Sr Marie Duddy were killed in a collision with a PSNI unmarked car on the main Belfast to Dublin motorway near Newry in Co Down.

The two Mercy nuns were on their way to the Dromantine Retreat and Conference Centre in Newry at the time of the crash.

The retired Sisters were both from Ballysillan House on the Crumlin Road in north Belfast.

Sr Frances Forde was a retired school principal and was very active in her local Belfast community, while Sr Marie Duddy had recently published a history of her order’s ministry in Northern Ireland.

The three PSNI officers travelling in the other car involved in the collision were slightly hurt.

In a statement, the Mercy Sisters of the Northern Province said they were “struggling to cope with their sudden parting from us.”

The congregation said they took comfort from the example of the lives of Sr Marie and Sr Frances which were “lived in the service of God and God’s people.”

They offered heartfelt sympathies to the brothers of the nuns, Jesuit Fr Brendan Duddy of Milltown Park, Dublin and Fr Peter Forde, pastor emeritus of St John’s Parish Belfast and to their other family members and friends.

In his statement, Bishop Treanor said that over the years the two Sisters had blessed the Church with ministries ranging from healthcare, education, spiritual guidance and cross community and inter-faith dialogue.

Offering his sympathy to the other Sisters of Mercy who had gathered for a convention in Dromantine, Bishop Treanor said he also offered his particular support to those Sisters with whom the two nuns lived and who undoubtedly had been left stunned by the tragedy.

Rev Norman Hamilton, a former minister of Ballysillan Presbyterian Church, described the nuns as “two gracious, warm-hearted ladies, who were always concerned for the welfare of other people, no matter who they were.”