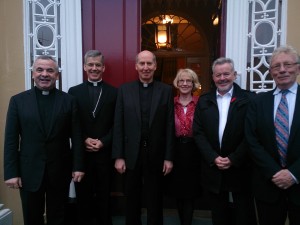 The Papal Nuncio to Ireland has revealed that people tell him on a daily basis that they are reconsidering their lives, their actions and their faith practice because of Pope Francis.

In his homily to celebrate the Festival Mass in connection with the 62nd Wexford Opera Festival, Archbishop Charles Brown said the Pope isn’t getting that reaction by outlining a list of do’s and don’ts.

“Instead, the world’s parish priest proclaims the message of God’s mercy in such human terms one cannot help but listen. He lives a life so obviously influenced by Jesus that one cannot remain unaffected,” the Nuncio said.

Drawing an analogy between listening to beautiful music and listening to God, Archbishop Brown told the congregation gathered in the Church or the Immaculate Conception in Wexford, “When we listen to a beautiful piece of music, we are drawn into something beyond ourselves.”

He urged those about to participates in the Opera Festival and enjoy its productions and music, to listen and respond to the music of God and the melody of his mercy.

Discussing the theme of mercy in Pope Francis’ pontificate, Archbishop Brown said even his “tastes in music are shaped by this fundamental theme of mercy.”

In his recently published interview in La Civiltà Cattolica, the Pope spoke of his special love for Bach’s St Matthew’s Passion and especially for the aria ‘Erbarme dich’, where St Peter suddenly recognises the enormity of his betrayal of Christ and cries out, “Erbarme dich, erbarme dich, mein Gott” – “Have mercy, have mercy on me my God.”

He explained that following Peter’s denial of Jesus three times and his cry for mercy, Jesus appeared to him after the resurrection and asked him three times “do you love me?”

“Peter is completely healed by this encounter with mercy, transformed from being Peter the denier, to Peter who will bring the message of the mercy of God across the sea to Rome where he will die as a martyr.”

“As Catholics, we refer, of course, to Peter as the first Pope; that means that the experience of mercy is in the DNA of the Papacy.”

He said that it is for this reason that mercy is the foundation of Pope Francis’ vision of the Church.

“The Church is not a club for those who consider themselves perfect. Rather, as Pope Francis has said … the Church is a hospital for sinners in which all of us are getting better, becoming more whole by the gift of divine grace.”

The Papal Nuncio said that central to the mission of mercy in the Church is the sacrament of Confession, in which we experience in a personal and direct way the mercy and forgiveness of God, and are healed by his grace.

He highlighted that the prayer of absolution, which is spoken in the sacrament of Confession by the priest, begins with the words “God, the father of mercies”.