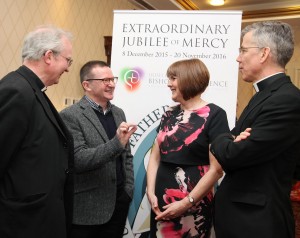 In an address at a one day conference in Dublin at the weekend, themed ‘Opening the Door of Mercy’, the Papal Nuncio expressed concern over the “growing narcissism” evident in society today.

He said it is “important for us to see some of these psychological dysfunctions in society as the manifestation of, perhaps, an underlying spiritual dysfunction”.

The conference, which was organised by the Council for Pastoral Renewal and Adult Faith Development of the Irish Bishops’ Conference, was also addressed by Rev Professor Michael Conway of St Patrick’s College Maynooth and journalist and author Susan Gately.

Referring to an article by Guardian columnist Zoe Williams last week titled ‘Me, Me, Me – Are We Living Through a Narcissism Epidemic’, the Nuncio highlighted the journalist’s concerns about attention seeking celebrities, digital oversharing and the boom in cosmetic surgery, leading her to conclude that narcissistic behaviour is all around us and prompting her to ask how worried we should be about our growing self-obsession.

Alluding to the book ‘Trapped in the Mirror’, Archbishop Brown said it was a very interesting diagnosis of the current cultural situation of narcissism which is widespread in society. 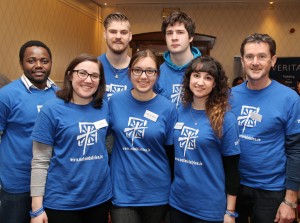 “Original sin is the origin of all of our narcissistic traits and characteristics,” he said.

The narcissist, he said, sees other people as like items in a vending machine and uses them to service their own needs, “Never being able to acknowledge that others might have needs of their own, still less to guess what those needs might be.”

In the 1970s it became popular to talk about narcissism in the context of the so-called ‘me’ generation – a generation which he described as “completely self-focused”.

“I think it is a good place to begin to talk about Pope Francis and mercy. To talk about the cultural situation in which we live. This kind of growing narcissism that we see in society,” he commented.

He recalled Pope Francis’ discussion of narcissism on 9 January 2015 in one of his morning sermons at Mass in Santa Marta in a homily on hardened hearts.

The Pontiff had said the problem of hardened hearts has many elements such as pride, self-sufficiency, a sense that one is better than others and vanity and he went on to say that there are men and women who are devoted to the mirror.

He added that the Pope had said this is what creates a hard heart, “because these people are closed, they are not open. And they seek to defend themselves in their narcissism by creating walls around themselves.”

Referring to Saturday’s Gospel in which the Pharisee is cited as priding himself on being virtuous and despising everyone else, the Nuncio said the Pharisee’s prayer: ‘I thank you God that I am not like him’ was really the Pharisee talking to a God that is himself. “This is pure spiritual narcissism,” he said.

The whole point of the year of mercy is to go out of ourselves and to go in search of the other, Archbishop Brown told the conference delegates and drew a link between the Year of Faith and the Year of Mercy. 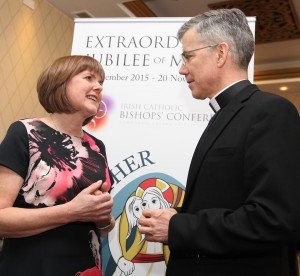 “Faith is the foundation, mercy is the effect – the manifestation of what we have received from the Lord,” he said.

Recalling Pope Francis’ visit to Cuba last September, the Nuncio said he had talked about the encounter with the Lord which Matthew had experienced and which was behind his papal motto.

Jesus looked at Matthew with the eyes of mercy as no one ever looked at him before and that look unlocked Matthew’s heart and set him free and healed him and gave him hope.

“After the Lord looked at Matthew with mercy, he said follow me and Matthew got up – after the look, a word; after love, mission. Matthew is no longer the same, he is changed inside. He encountered Jesus’ loving mercy.”

“His table, money, exclusion, closedness were all left behind. Before he had to sit waiting to collect taxes – to take from others, to see others like materials in a vending machine. Now he must give himself to others.”

“Mercy is about the heart: seeing someone’s hurt, suffering, need and having your heart moved by that.”

“Mercy – the movement of the heart – that is what makes the Church go forth to share mercy with the entire world. That makes all of us go forth.”

In her address, Susan Gately, author of ‘God’s Surprise: The New Movements in the Church’ spoke about these movements and communities in the context to this Year of Mercy, highlighting some key concepts that Pope Frances affirmed in Misericordiae Vultus, which are central to the life of many Movements.

“There is a great variety of charisms in the movements and new communities and not surprisingly many of these founders have written about God’s mercy,” she explained.

“You could ask yourself what is the link between Mercy and our movements or communities. I believe the link is that movements and communities are places or better still, as Pope Francis, mentioning movements and associations calls them, ‘oases of mercy’ (MV 12).”

She explained that the movements are places or spiritualities where people find God, experience His love and forgiveness, and find strength to start new lives. 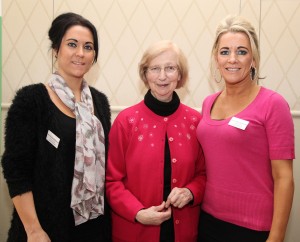 Pic shows Pauline Mc Donnell, Sr May Nyhan and Geraldine Mc Donnell from the Parish of the Travelling People who attended the conference on Saturday. Pic John Mc Elroy.

Movements create these holy places through their members coming together to form cells or communities out in the world – in homes, schools, workplaces or simply wherever they meet. Yet by our friendship and warmth and mutual love and support, we create places that allow people to meet God.

Her book ‘God’s Surprise, the new movements in the Church’ describes her meetings with ten new movements or communities: Charismatic Renewal, Communion and Liberation, Legion of Mary, L’Arche, Parish Cells, Focolare, Cursillo, Youth 2000, Teams of Our Lady and the Community of Nazareth

But the married mother of two said that when she was writing a series on the new movements for Reality magazine she visited another twelve groups, including St Paul’s Community, the Neocatechumenal Way, Marriage Encounter, the Emmanuel Community, Céili Community, Cana – Chemin Neuf, Couples for Christ and the Apostolate of Eucharistic Adoration.

She is hoping to publish an e-book with the articles on the other groups.

Warning that “we live in a secularised world permeated by many evils which unfortunately, through communications technology and social media, can be multiplied to the nth degree”, she said “Secularisation devours faith.”

She pointed to two dangers which can perhaps be present in groups and how she sees the Year of Mercy as a chance to reach beyond these dangers.

“The first danger is that of placing too much emphasis on structure and administration and this can take a lot of our energy perhaps allowing little chance for our spirit, our charism to burst out in a new way.”

“We have to be careful not to end up as a holy huddle doing what we have always done but perhaps with shrinking numbers.”

“The second danger is that our groups can become specialist agencies dealing with particular outreaches. So when we meet a homeless person, we direct them to Fr Peter McVerry; someone in need financially, we go to St Vincent de Paul; if a marriage is in trouble, we direct the couple to Accord or Retrouvaille.”

“Undoubtedly it is wonderful to have these groups who are looking after people with these issues, but I think we also have to have eyes of mercy that help us to reach out to the people we meet day by day and build relationships with them and see where the Spirit takes us,” Susan Gately said.