New generation of Catholics will lead Church forward into next decade. 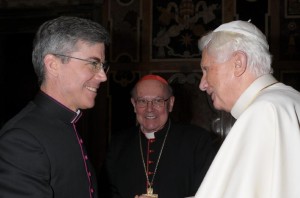 The last twenty years have been like a winter for the Church in Ireland, but a springtime is beginning, and there are “green shoots”, says Ireland’s papal nunico,  Archbishop Charles Brown.

“I see a renewed enthusiasm among young Catholics in Ireland now,” he told CatholicIreland.net.

The new generation of Catholics, some of whom are studying for the priesthood in the national seminary in Maynooth or the Irish College in Rome, has been purified like gold in the fire, says Archbishop Brown who took up residence as Apostolic Nuncio early in 2012 following Pope Benedict’s letter to the Catholic Church in Ireland and the visitation he had ordered.

“This new generation will lead the Church forward into the next decade” he says with conviction.  They represent what is best in the tradition of Vatican II “the idea of communicating the ancient unchanging faith in a new, vibrant and attractive way”.

The  New Yorker who worked for years alongside Pope Benedict XVI at the Congregation for the Doctrine of the Faith, was Pope Benedict’s personal appointment.

Describing the emeritus Pope as “a man of great and deep spirituality” he said Pope Benedict was  “able to grasp the complexity   of reality and the beauty of God’s grace in a profound way, and that made him humble.”

He was surprised when Pope Benedict asked him to come to Ireland. “I hadn’t trained as a diplomat but in my life as a priest I’ve always had the idea that by doing God’s will, I find joy,” he said.

“Moving into the life of a nuncio, I experienced more trepidation than I revealed to the people around me, but from the very beginning people in Ireland, from the government to the bishops, all treated me so kindly, so instantly I felt at ease here, from the moment I presented my letters of accreditation to President Higgins.”

“I felt the embrace of the Irish.”

Catapulted into a difficult situation and time for the Church, he says his biggest challenge is to trust in God. “You look at the great history of the Church in Ireland, the saints, its fifteen centuries of faith and you realise how inadequate you are to play a role in the continuation of that.”

But he is pragmatic and those moments pass.  He tries not to focus on himself and difficulties, but   keep his eyes “focused on Christ, God made man. Then all things are possible.”

Archbishop Brown says he sees positive signs on the vocations front, but realistically, the numbers of priests will continue to decline for a while.  “Parishes will have to share resources and combine and cluster and that will be an opportunity for lay people to take on a larger role in the Church.”

Having said that, he is convinced that priestly vocations are “crucial” for the renewal of the Church in Ireland.

Asked about the upcoming synod on the family, Archbishop Brown said he believed there will be “candid and frank discussions about some of the doctrinal issues that have now been surfaced in the last several months, but the outcome of that remains to be seen, it is in the hands of God and certainly under the inspiration of the Holy Spirit.”