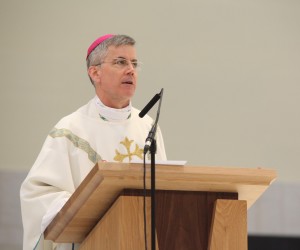 Pope Francis is quite clear that the foundation for the ethical claim that the environment needs to be protected arises out of this natural moral law written in the human heart, the Papal Nuncio, Archbishop Charles Brown said on Monday.

In his homily for the Red Mass at the commencement of the Michaelmas law term in St Michan’s church in Dublin, the Archbishop said reflected on the Pope’s “extraordinarily successful” recent visit to Cuba and the US.

He told the assembled members of the legal profession that the Pope’s two major speeches, to a joint session of Congress and to the General Assembly of the United Nations, were “ground-breaking”.

In both, the Pontiff repeated the call he made in his Encyclical Laudato Sì for care for the environment and for concerted action in the face of the ecological crisis afflicting the planet.

The Papal Nuncio noted that the Pope specifically called attention to the urgency of averting “the most serious effects of the environmental deterioration caused by human activity” in his address to the Joint Session of Congress.

“But what was equally significant about the Holy Father’s call for environmental responsibility, especially for people involved in questions of law, was the basis or the foundation of his appeal,” the Nuncio observed.

Discussing the underlying motivation for the Pope’s urgent environmental concern, the Nuncio referred to Laudato Sì, where Francis states that “Human ecology also implies another profound reality: the relationship between human life and the moral law, which is inscribed in our nature and is necessary for the creation of a more dignified environment” (Laudato Sì, 155).

“Human living, that is to say, living together in a human way, implies the recognition – as Pope Francis put it – of a moral law inscribed in our very nature as human beings, an ethical norm which precedes any specifically religious revelation,” Archbishop Brown stated.

He noted that the day after his speech to Congress, Pope Francis in his address to the General Assembly of the United Nations had observed, “…the defence of the environment and the fight against exclusion demand that we recognise a moral law written into human nature itself.”

Admitting that what is implied by the natural law can fluctuate to some degree from culture to culture and from one historical period to another, Archbishop Brown said it was not always easy to determine what the natural law requires in concrete cases.

But he added that Pope Francis is quite clear that the foundation for the ethical claim that the environment needs to be protected arises out of this natural moral law written in the human heart.

He said the challenge today is to discern what an approach might be which would deny that anything like human nature and objective ethical imperatives arising from that nature exist in the first place.

“In such a view, human existence is simply what we make of it; there is nothing to be learned from the natural order in seeking to decide how human beings ought to live,” he suggested.

“What replaces reflection on human nature and on what human nature tells us about how to live, is a largely political calculus in which disparate individuals and constituencies seek to obtain the maximum freedom to construct their existence as they individually see fit.”

He said this approach was expressed in a now famous line from a 1992 Decision of the Supreme Court of the United States, which stated that “At the heart of liberty is the right to define one’s own concept of existence, of meaning, of the universe, and of the mystery of human life” (Planned Parenthood vs Casey).

Archbishop Brown suggested that this concept of liberty represents “an enormous abdication of our responsibility to seek some meaningful communality among human beings, based on our shared human nature”.

He suggested that it leads easily to the kind of “atomistic, individualistic and deracinated existence” which has become increasingly prevalent in many parts of the Western world today.

It also makes it quite difficult to tell someone that they are not absolutely free to act on their own constructions of their personal reality, or to decide completely on their own who they will choose to respect as having a human dignity equal to theirs.

“It is, as I have said, admittedly more difficult to do the hard work involved in proposing and identifying the norms which govern how we are to live, norms which necessarily at times limit our absolute freedom to act as we might wish.”

These norms, as Pope Francis was not afraid to remind us in his address before the General Assembly, include things like “the natural difference between man and woman (cf. Laudato Sì, 155), and absolute respect for life in all its stages and dimensions.”

These principles, and others like them, are important not simply because they protect certain values and certain groups of vulnerable people, but also because on a deeper level they imply that all human beings, simply because they are human, are required to respect them, he said.

The Nuncio commented that the recognition of a natural law and of obligations flowing from that law strengthens human solidarity and communality because it implies the possibility of a common shared understanding of what it means to be human.