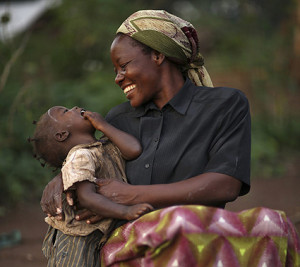 A nun who has helped more 2,000 women and girls abused and displaced by the Lord’s Resistance Army (LRA) in the Democratic Republic of Congo is to receive the UN’s Nansen Refugee Prize later this month.

Sr Angelique Namaika was selected for her extraordinary humanitarian work on behalf of refugees, internally displaced or stateless people.

She will also receive $100,000 which will go towards supporting her Centre for Reintegration and Development.

Through her work at the Centre for Reintegration and Development in a remote north-east region of the Democratic Republic of the Congo (DRC), Sr Angélique has helped thousands of victims of the conflict, who have been traumatised and abused. The women are often ostracised by their families and communities.

The LRA are a rebel group originating in Uganda. Many of those she helps recount stories of abduction, forced labour, beatings, murder, rape and other human rights abuses.

Her one-on-one approach helps them recover from the trauma and damage. On top of the abuse they have suffered, these vulnerable women and girls are often ostracised by their own families and communities because of their ordeal.

It takes a special kind of care to help them heal and to pick up the pieces of their lives. Sr Angélique does this by helping them learn a trade, start a small business or go back to school.

Testimonies from these women show the remarkable effect she has had on helping turn around their lives, with many affectionately calling her “mother.”

The announcement of the 2013 Nansen prize coincides with the release of a report about life for those displaced by LRA violence.

Since 2008, hundreds of thousands of people have been forced to flee in DRC’s north-eastern province of Orientale – in some cases several times.

Today, an estimated 320,000 of them are still living in displacement. The report, produced by UNHCR and the IDMC (Internal Displacement Monitoring Centre), highlights why LRA violence has created such severe and long-lasting trauma for both the abductees and the hundreds of thousands of people still too afraid to return home.

Sr Angélique herself was displaced by the violence in 2009 while living in the town of Dungu, in Orientale province. She knows the pain of fleeing one’s home. It is part of what drives her to work day in and day out to reach all those in need.

“Sr Angélique works tirelessly to help women and girls who are extremely vulnerable due to their trauma, poverty and displacement. The challenges are massive, which makes her work all the more remarkable – she doesn’t allow anything to stand in her way.”

“Working in a location where electricity, running water and paved roads are scarce, the nun’s work is exceptional. Although she lacks proper tools and her resources are almost non-existent, Sr Angélique does not allow herself to be deterred. She has made it her life’s work to ease the suffering of these uprooted women and girls – to give them renewed hope for the future.”

Guterres continued, “These women’s lives have been shattered by brutal violence and displacement. Sister Angélique has proven that even one person can make a huge difference in the lives of families torn apart by war. She is a true humanitarian heroine.”

Responding to the announcement, the new Nansen winner said, “It is difficult to imagine how much the women and girls abused by the LRA have suffered. They will bear the scars of this violence for their whole lives.”

“This award will mean more displaced people in Dungu can get the help they need to restart their lives. I will never stop doing all I can to give them hope, and the chance to live again.”

Sr Angélique will receive the Nansen Refugee Award and the Nansen Medal at a ceremony in Geneva on 30 September.

Following the ceremony, Sr Angélique will travel to Rome, where she will be received at the Vatican by Pope Francis on 2 October.