Pope warns religious communities who have stopped using the word because they think young people are scared by it that this is “a strategy doomed to failure.” 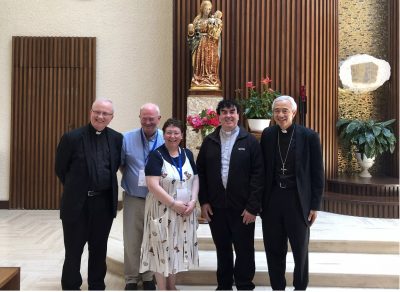 Pope Francis criticised religious communities who have stopped using the word “vocation” in their work with young people.

Addressing participants at a Congress for the Pastoral Care of Vocations in Europe, the Pope told them not to be afraid to proclaim the vocation to consecrated life and to ordained ministry.

The Church needs this, he stressed.

He also warned those communities who have stopped using the word because they believe that young people get scared by it and may be reluctant to join in their activities, that this was “a strategy doomed to failure.”

“What we need are men and women, laity and consecrated people who are passionate, set afire by their encounter with God, redeemed in their humanity, and capable of proclaiming in their lives the happiness born of their vocation,” he said.

Pope Francis said vocation was always for, and with, others.

“[The Lord] never calls us simply as individuals, but always within a community, to share his loving plan, which is plural from the outset because he himself is plural, a Trinity of love. It revives our awareness that, in the Church, nothing is accomplished alone.”

Representatives of the Irish National Vocations Office and Vocations Ireland attended the Congress for the Pastoral Care of Vocations in Europe.

The focus of the meeting was to address the final document of the Synod on Young People, the Faith and Vocational Discernment, and incorporate its message into vocations promotion in the context of Europe.

Fr Willie Purcell of the National Vocations Office in Maynooth said, “In Ireland we wish to help young people realise that each one of them has a unique calling from Christ, and we aim to support them in answering that call, particularly in the case of those who are discerning vocations to the priesthood or religious life.”