Home > Featured > “No words” to describe latest attacks in Syria 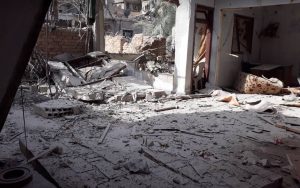 “Yesterday was like hell. It was raining bombs,” a nun has described the latest and most horrific of bombings in Syria.

“My two hands are not enough to cover my two children and protect them from the insane bombing around us,” a partner agency of Trocaire reported the comments of one resident.

Unicef released a blank sheet of paper as a statement in response to reports of mass casualties including many children in Eastern Ghouta and Damascus. The only words on the top of the paper are: “No words will do justice to the children killed, their mothers, their fathers and their loved ones”.

Sister Annie Demerjian said that she, fellow nuns and students, narrowly escaped death on Tuesday (20th February) when the sky “turned black”. A rocket landed very close to her convent in the Bab Touma district of Damascus’s Old City, and had it exploded she and some of the university students would have been wounded or killed.

Speaking to Catholic charity, Aid to the Church in Need, Sister Annie described how another member of her congregation, Sister Manal, ran through the streets to dodge the bombs and somehow made it back to the convent unharmed. Sister Annie is a Religious of Jesus and Mary, and is a leading project partner for ACN, which provides emergency and pastoral help in Syria.

Her comments come after a sudden upsurge of violence in Damascus including the rebel-held Eastern Ghouta, with reports of more than 250 people killed in the last three days. Sr Annie said that schools have closed and also appealed for prayers. She concluded that she and her colleagues will carry on, and that life is stronger than death.

Women Now for Development, a Trócaire partner in Syria, stated that two of their three centres in Eastern Ghouta, have been completely destroyed. In their statement they explain that over the past few weeks, the Syrian regime and its allies have been carrying out a military campaign on Ghouta.

“Only yesterday, more than 72 airstrikes and 42 barrel bombs targeting residential areas were carried out, and the number of casualties is rising by the minute. All civil defence teams are exhausted, many hospitals came out of service because they have been targeted yesterday by the Syrian regime,” they report.

They and their colleagues, who worked in the now destroyed women’s centres, are trying to stay alive with their families in the dark and ill-equipped shelters along with all other families of Eastern Ghouta. “The shelters are not supplied with enough water or food, and children have not seen sunshine for weeks,” they said.

They have appealed to everyone to raise their voices for the families of Ghouta “before we see a repeat of Aleppo. The violence needs to stop now and civilians need to be safe from bombing and shelling.”

A UN statement reported that nearly 400,000 people in Eastern Ghouta have been subjected to airstrikes, shelling and bombardment. Secretary-General António Guterres said in a statement that he was “deeply alarmed by the escalating situation in Eastern Ghouta and its devastating impact on civilians.”

He added that more than 100 people were reportedly killed since Monday, including at least 13 children, while five hospitals or medical clinics were hit by airstrikes. The Secretary-General urged all involved to ensure basic principles of international humanitarian law are adhered to, including unhindered humanitarian access, unconditional medical evacuations, and the protection of civilians and their infrastructure.