‘No whingeing’ Pope Francis advises those seeking to improve their life 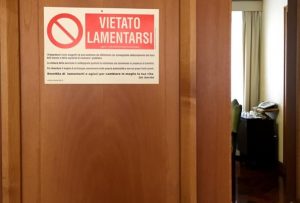 Pope Francis has offered some sage advice to those who want to get the best out of themselves.

A notice tacked to the door of his Santa Marta residence in the Vatican urges complainers to stop whingeing and take steps to improve their life.

“To get the best out of yourself, concentrate on your potential and not on your limitations,” the sign exhorts.

The sign was presented to the Pope on 14 June at a general audience by Italian life coach and motivational speaker, Salvo Noé, according to Vatican Insider.

On his official website, Noé posted photos of his brief meeting with the Pope, one of which shows Pope Francis laughing heartily at the contents of the sign.

“The expression [Pope Francis] made when presented with the ‘No whingeing’ sign was beautiful,” Noé wrote on his website.

The sign and a bracelet, which reads “Stop complaining”, are part of a promotional campaign for his new book of the same name.

Italian journalist Andrea Tornielli published a photo on Vatican Insider of the sign posted on the Pope’s door.

The sign warns complainers that “offenders are subject to a victim mentality” that decreases one’s sense of humour and ability to solve problems.

“The penalty is doubled if the violation takes place in the presence of children.”

In his homily on 30 September 2014, Pope Francis said complaining to God in times of suffering can be a prayer, but cautioned not to exaggerate our difficulties in front of those undergoing major tragedies.

“Our life is too easy, our complaints are overdramatised,” the Pontiff told those gathered for daily Mass.

The Pope said he had listened to many “who are experiencing difficult and painful situations, who have lost a great deal or feel lonely and abandoned and they come to complain and ask these questions: Why? Why?”

When he encounters these people, who often rebel against God, he said he tells them: “Continue to pray just like this, because this is a prayer. It was a prayer when Jesus said to his father: ‘Why have You forsaken me?’”

Prayer means being truthful before God, he said, adding that we should all “pray with reality” because “true prayer comes from the heart, from the moment that we are living in.”