Home > Featured > Nineteen babies born into homelessness in one year 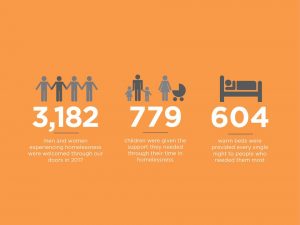 Depaul saw 19 babies born to women in its homeless services in the island of Ireland during 2017. This is according to its Annual Report 2017, which was launched on Monday 15 October.

“I think that it is quite a shocking thing to hear that there are babies being born into homelessness, particularly coming up to Christmas,” Kerry Anthony, CEO, Depaul, told catholicireland.net. “Living in emergency accommodation can have a detrimental impact on children and young people. That is why we advocate strongly to try and move people out of homelessness.”

The Annual Report calls for a move away from emergency accommodation to more permanent solutions. During 2017, the charity helped 3,961 men, women and children who were homeless or at risk of homelessness.

Depaul saw a particularly large increase in families accessing its services in both the Republic of Ireland and Northern Ireland. A total of 473 families were helped throughout 2017. Depaul’s Dublin-based services saw an increase of 60 per cent in the number of families it supported, while in Northern Ireland Depaul helped 27 per cent more, which amounted to 215 families with 367 children.

In the Republic of Ireland the charity supported 258 families, which included 412 children, with accommodation and outreach services, an increase of 41 per cent from last year.

“The rise in family homelessness is very worrying, particularly the rise in the number of children Depaul supported in 2017. The best solution to homelessness is housing-led, providing real homes for those in homelessness,” Kerry Anthony told catholicireland.net. 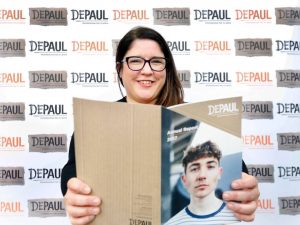 The charity launched the report with staff and volunteers present at its premises at Little Britain Street, Dublin, which has expanded to become an 89-bed emergency accommodation hostel.

In 2017 Depaul also took over management of Brú Aimsire, a 101-bed emergency accommodation hostel in Dublin. This meant that the number of emergency beds provided by Depaul almost doubled to 200 in a 12-month period.

Kerry Anthony highlighted that a core group of over 2,000 single adults in Dublin is still very much struggling with the current system and needs help and support.

She welcomed the recent announcement about the further rollout of Housing First by government and said that Depaul hopes to be at the forefront of its implementation.

Depaul Ireland is part of Depaul International, a group of charities working to support people who are homeless and marginalised around the world, helping over 10,000 people every year.

It has close links with the Society of St Vincent de Paul and other members of the Vincentian family but is a separate charity. Depaul Ireland’s founding partners were the SVP, Daughters of Charity and Vincentian Fathers.