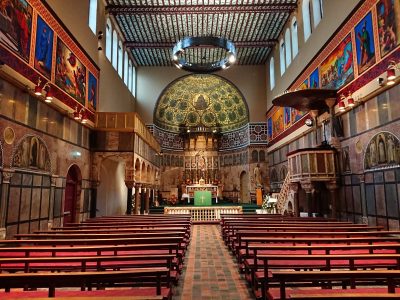 The canonisation of Saint John Henry Newman was celebrated in Dublin yesterday (Sunday 20 October) in the church that the cardinal founded, the Newman University Church, also known as the Church of Our Lady Seat of Wisdom, on St Stephen’s Green.

This church can be seen as  ‘a theological statement in stone, marble and paint’ of Newman’s vision of his mission and of his university, said Archbishop Diarmuid Martin. Initially, when the church was opened in 1856, it was attached to the neighbouring Catholic University where Newman was rector, an appointment he took up in 1854. For a while, the church was attached to Harrington Street Parish but since 1974 it has served as a parish church in its own right.

‘During his lifetime, Newman was linked with and attached to many buildings and churches, old and newer, that he gradually adapted to his needs and aspirations,’ said Archbishop Martin. ‘This church was his own creation and was a forward-looking symbol of his great ambition of a university in which faith and reason would fruitfully interact.

‘A university is a place of universal learning and for Newman the exclusion of faith from any such forum of learning would lead to a reduction in the quality of learning. This church is in a sense an integral chapter, written in stone and marble and paint, of Newman’s “Idea of University”.’

Meditating on the newly canonised saint’s life and what it means to us today, Archbishop Martin noted that, when he was still known to the world as Cardinal Joseph Ratzinger, Emeritus Pope Benedict XVI had written about Newman and the life of the Englishman before and after his conversion from Anglicanism to Roman Catholicism.

‘Ratzinger referred to “a never-finished conversion”,’ said Archbishop Martin. ‘Newman’s life was a persistent seeking for the truth. Just as much as he was a convert from Anglicanism to Catholicism, he remained a convert within Catholicism.

‘Newman persisted in his search amid the gloom of evening, when the night was dark and when he was far from home, trusting in that kindly light that would lead him on. In the moments when he was tempted to seek and choose his own path, he slowly began to remember that only the kindly light of God would lead him step by step into the future and so become ever more himself. Newman’s search into faith became a never-finished seeking.’

Archbishop Martin finished his homily by emphasising Newman’s view of God’s light as a kindly light and contrasting his ideas with the behaviour of modern-day ‘keyboard crusaders’ on the internet.

‘I am astonished at the content and tone of daily messages on social media by Catholic pundits on the left and the right that are anything but kindly,’ he said. ‘There are those who spend all day attacking and responding and feeling that, in this, they are defending the integrity of Church teaching. The kindly light will never be defended by nastiness and bitterness. Such negativity and polarisation reflect rather a pointless retreat into self-defined false certainties.’

Another aspect of Newman’s view of God’s revelation, said the archbishop, is that ‘the kindly light also ruthlessly shows up the hypocrisy of indifference and disinterest towards the fate of the poor’.